I decided to kick off the tests of my card table set up with the latest version of Bob Cordery's Big Board Portable Wargame.  The scenario involves a rearguard holding a defile against a larger enemy force that is in pursuit and arriving in a some what disorderly manner. 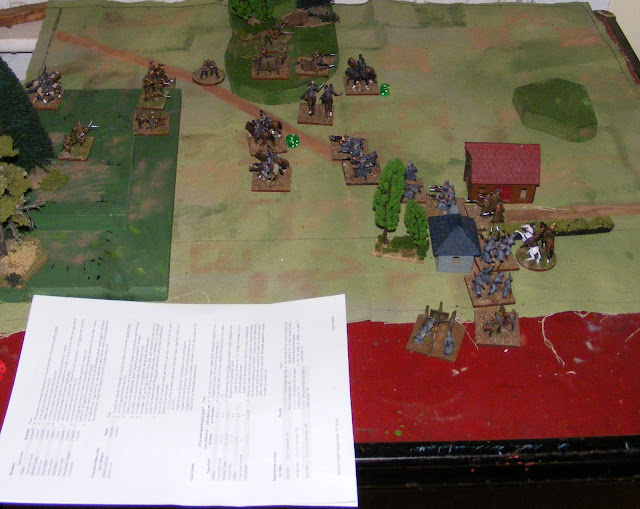 Turn 3 as the Reds straggle on.
My mom's card table is older than me but still does what it has always done.
The Reds sent their cavalry to silence the White artillery. It took two tries but eventually worked at the cost of 2 cavalry units destroyed and 2 severely damaged, largely due to the supporting infantry and MG. An infantry attack on the left hand hill pushed back the defenders and took out the mg but again at   a high cost. A counter attack by White cavalry took out a Red infantry unit and the Reds hit their exhaustion point which prevented them from achieving their mission of exiting the table. 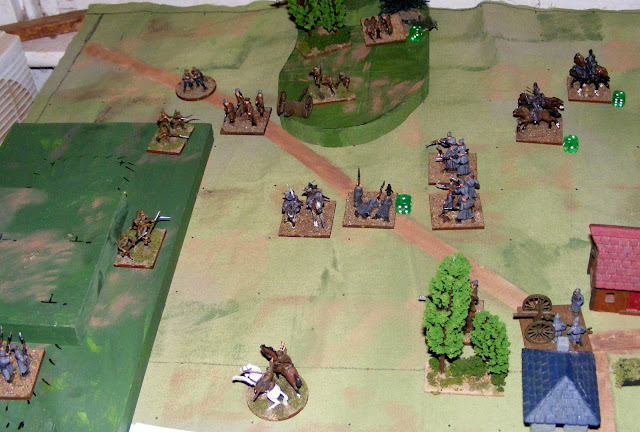 The end of the game. Red's attack has stalled.


Over all the mock up playing 'board' worked well although I missed a few of the squares when I was demarcating which made for a small amount of confusion once or twice. It will definitely work to entertain me and get some extra games in over the winter.

The Portable Wargame rules also worked OK. There were a few areas where I was unclear but I decided to follow the letter of the rules unless something felt wrong. Some of the questions & comments (for Bob but also for the interest of other readers), were:

a) can a unit which is adjacent to an enemy shoot and be shot at if there is a clear LOS. I decided that since it was not mentioned that they could. This meant that Red infantry supported an attack on the artillery by shooting at the gun crew and that the gun ignored the attack on its flank and kept firing during the artillery phase.  This had the unfortunate result of the artillery suffering a hit which allowed them to retreat except that artillery which fired can't move  so it had to be taken as a loss.

b) If a unit moves adjacent to 2 enemy units, 1 facing, 1 not, can it ignore the facing one and make the flank attack? I decided that it had to deal with the facing unit first although the rules seem to leave it up to the attacking player. (It would have left their own flank vulnerable if the close combat stalled.)

c) Do units that begin in contact have to fight in close combat if they don't retreat? As far as I could see, if a unit is not activated it does not have to fight.

d) Is the Initiative roll once per game or once per turn. I tend to regard the activation roll as equivalent since a side that rolls low in effect misses a turn with some units.

e) This one is just an observation, there was only 1 turn where the Red's weren't able to activate all of their units with points to spare. Lucky rolling perhaps but it made the roll feel a bit redundant. I think next time I might round down instead of up with a minimum of 1 die, just to increase tension.

f) Woods. I couldn't find a movement penalty for woods. I have trouble seeing horse artillery galloping through woods at full speed. This particular scenario specified that the wooded hill was impassible  to all but light infantry so I decided that the scenario trumped rules.

g) Another comment. I kept forgetting to add the stationary shooting bonus but kept trying to apply a move and shoot penalty.  Habit!  It works well and I almost had it down by the end.

h) I was glad to see that attacking units are more vulnerable when attacking uphill. I would tend to apply the same to units attacking over an obstacle, such as an abatis or  wire (assuming the enemy has put them selves adjacent  to the wire rather than being one square back).

i) I couldn't find a definition of retreat so allowed a move to any adjacent square that is not occupied by a unit of either side or adjacent to an enemy unit. (all orthogonal of course)

j) I still don't like the roll to avoid being hit in close combat mechanism but when combined with the roster it worked ok.

All in all an enjoyable little game with what felt like a reasonable result.