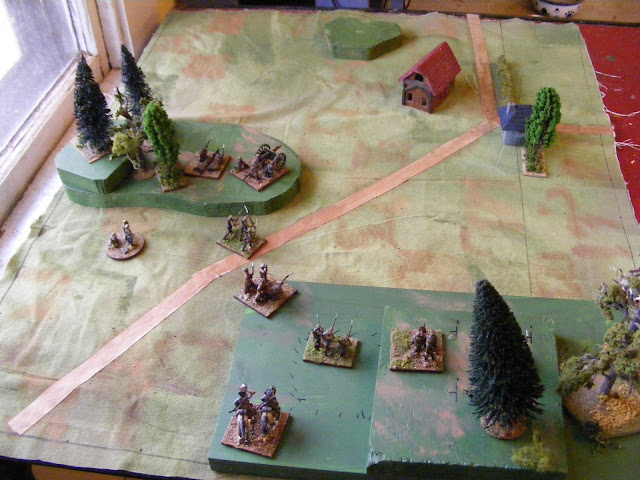 At lunch yesterday, Lentullus once again sang the praises of Pendraken 10mm so I spent some time on their website and decided that I could get everything I needed for a 10mm Boer War game. But the after effect of the Battlecry in the Sudan game at Ron's must have still been with me since I woke up in a 1/72nd frame of mind.

In the meantime, I had decided to  use another piece of that canvas drop sheet to make a mock of a 2" grid battlefield which turned into a 6cm grid when it occurred to me I had some 6cm square bases that might be useable as 10mm hills. This morning I discovered that some of my smaller wooden hill material (ie offcuts) were pretty close to compatible as multi-area hills. After doing it it occurred to me that if the grid was 2.5" then the hills could be multi-purpose and used on both the 5" full table grid and on the 1/2 size one (duhh).  I was stuck for roads and streams until I remembered  that masking tape takes paint well and is, of course, easy to remove. I didn't like the step effect of orthagonal roads so decided to allow diagonal movement and the heck with consequences!

Anyway, here is the mock up ready for Scenario 3 (Holding Action -1) from Scenarios for Wargames. Not exact but close enough. The choice was ACW or RCW since I only have a handful of painted Colonials and the RCW have not been out this year so RCW it is. I think some early 20thC Fictional Colonial actions may be coming this winter, British vs Russians and/or Afghans and/or British in South and/or East Africa. the final board(s) will be made of some 1/4 plywood-ish  stuff, possibly with a 3 sided backboard to hinder things from rolling off if ummh.. disturbed.