So far the weekend hasn't gone as planned. I twisted my ankle badly Friday afternoon and couldn't walk on it by evening. It was quite a bit better this morning but I felt lousy all over. This meant that I didn't get much work done but as the day improved in did some paint onto some 40mm Pandours and I did a lot of thinking.

Luckily I have learned not to take drastic action based on thinking when I'm tired, down or both so I haven't torn down my wargames table but I did break out the 3" grid again having realized that while I am quite taken with the idea of a game that fits the old card table and have proved to myself that it can work, I'm not wedded to it. The 2" grid won't work for me for anything larger than 1/72nd and even then 10mm would be better. I can fit 4x40mm figures in a 2" square but I just can't compress the terrain to fit in an acceptable fashion. Stylized terrain can fit on a 3" grid however along with 6 figure units of 40mm troops or 12 man 1/72nd units. The card table will only hold a 10x10 3" grid leaving no border but I would prefer at least a  12 x 8 grid for laying out teasers. Luckily I can rearrange things downstairs to fit a a 36" x 24" or 36"x30"  gaming table.
. 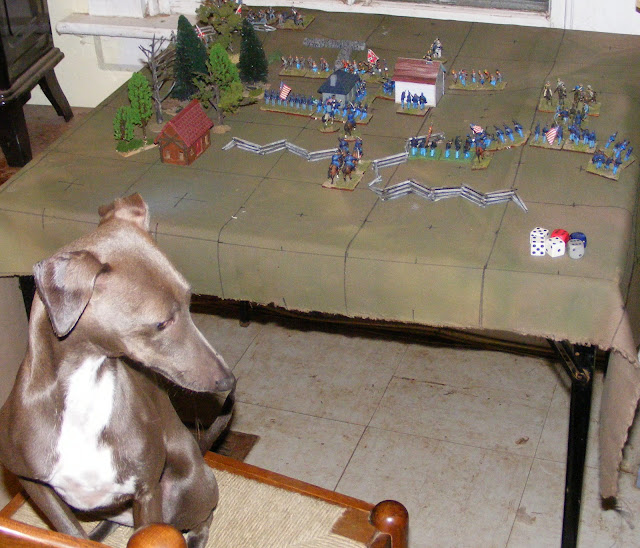 Lila getting a rules clarification about whether or not chewing "Dad's" figures is allowed.
After getting a definite "Red Card Infraction"  she lost interest, however, I did not go for tea until the game was over and the table cleared.

Since everything was close to hand I decided to improvise Sawmill Village again using the old cloth with a 3" grid and try it with 2 stand units and tweaked rules. Four things got tweaked, order dice, diagonals, the shooting hit score and the melee rule.

For order (aka activity) dice I went back to a concept I have used off and on for a while. 1 dice per Division General or equivalent with Pips being used to move a unit, a battle line of units including Brigadier or a march column including Brigadier. Like in DBA, the more organized the division is, the easier it is to control leading to attacks breaking down into firefights which don't need orders.

With the diagonal, once I started playing with units allowed to face it, I had found 2 situations, the one where a unit faced the diagonal and the move was straight ahead and the situation where a unit faced a side but moved on the diagonal, essentially doing an echelon or incline. Melees were also awkward. I could foresee more and more rules being added to deal with things and decided that it just wasn't worth it. So I am essentially back to Bob's Portable Wargame movement and measuring rules. One difference is that I don't like having an enemy move through a defender's fire zone into a flanking position. Rather than getting fancy I will specify that if the defender can shoot at the attacker before he moves, the attack must go in on the front if possible.

The shooting tweak was just that with only 2 dice, shooting was ineffective when only hitting on a 5,6 so I upped it to 4,5,6. This meant that melee was essentially the same but with an extra die and slightly different modifiers. I always found it odd in Battle cry that units couldn't automatically fire back even at 1 hex range but the more I looked at something similar the more it seemed to fit in here since the other side will automatically be able to shoot back. The current sequence means that the defender always shoots first then the attacker gets 2 rolls, one in his turn and then defensive fire in the other player's turn which hasn't sat well but the solutions I could think of called fro tracking which melees started this trun vs being carried over which I didn't feel like tracking if I could avoid it. With units attacking through a town, it was fuzzy as to whether or not they could claim cover in the 2nd round. Suddenly it seemed easier to just give a fire bonus for adjacent units. So, if an infantry unit has to move 2 squares to get adjacent then the defender will get first shot on his turn but if they only move 1 square (meaning they were already in range) then they get to shoot first with 2 dice before being hit next turn with 3 dice of fire. Cavalry will be allowed to charge 3 squares and fight. Here we will see a difference between muskets whose range is shorter than a cavalry move and rifles which equal to it. Cavalry will not be able to attack rifles without risking a round of fire during the previous turn. In practice the lack of melee rules seemed to work better than I had expected.

More on the game tomorrow as well as the amended rules.
Posted by Ross Mac rmacfa@gmail.com