Bridge over the River Howe fought 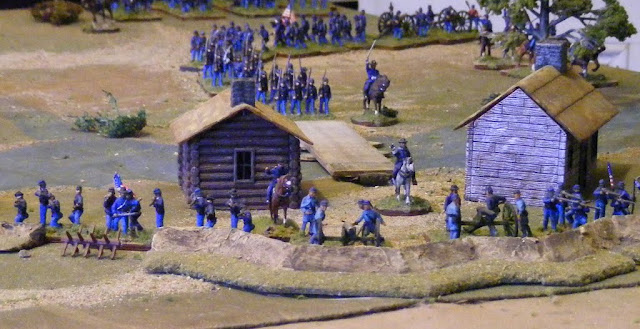 Game 1 the Yanks march over the bridge, whistling,
while some wise acre sings " Jeff Davis, had only one left...."

This game was being played primarily to test out various rule ideas. (see previous post for layout and forces) I started off by trying having each hit causing disorder on 1 stand. A  second disorder would remove a stand. Disorder caused a -1 to shooting and melee rolls. Unit morale would adjust the rally roll. The  first game got off to a slap bam start with the Reb artillery hitting both Federal guns then infantry hitting them with rifle fire. I'm not sure if anyone got to try making a rally roll. By the end of turn 2 the first Reb brigade was decimated and I decided to start again.

For game 2, I tried the proposed system of disordering a stand for every 2 hits for regular units with rallies being 1 die per disordered stand needed 4,5,6 to recover, -1 if having fought etc. That worked a little bit better but it was very tiresome dividing hits, dropping fractions, figuring out how to split fire etc and I noticed a lack of results, the firefight went on and on. 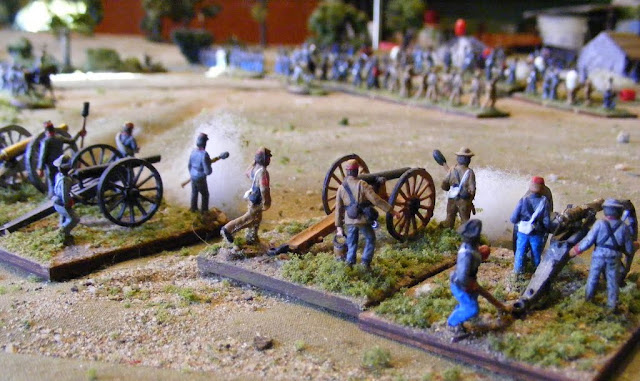 Game 3, The Reb gunners pour in fire and cheer on the PBI.

After a break for some chores, chow and a ponder, a dim bulb came on, somewhere in the deep recesses.

There were two separate issues,one of which was easily solved by declaring that a unit with all stands disordered had to retreat. Immediately at first, but that also caused issues so eventually I tried a joint retreat shaken units phase at the end of the turn. That worked well. Units that took a pounding would eventually fallback regardless of orders and if they failed their rallies, they kept going until they either rallied or fell off the table,

The second issue resolved around the 2 hits on a 6 which is why there were so many hits first time around and therefore why I was having to halve them now . Now I rather liked the 6 thing but I brought it in last year when I was playing with single figures and it has caused me some grief already. Its also a pain to try to instill the score into new players, like at a convention. Now that I'm back to stands and not basing any results on 25% like I tried, its not really needed. So, I dropped it and went back to a hit is a hit. But, I figured that as long as I was going back I might as well go all the way back to the Morchauser's basic 5,6 is a hit which I used for the first 8 years (with modifiers for range, cover etc). This increases to 4,5,6 in melee making it more deadly than shooting. This in turn meant a return to morale being used to modify rally rolls. 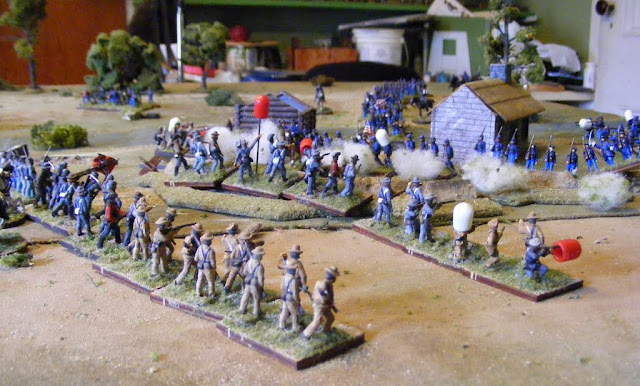 Taken together, things started to click and the game took some shape and became more engaging. The dice were as annoying as ever when seeking a decision with volleys which might have finished an enemy coming up all 1's and 2's while a last desperate stand produces boxcars. However, while the Rebs came close to sealing off the bridgehead, they couldn't quite do it and after repulsing a mounted charge, the Yankees started working around their flank. 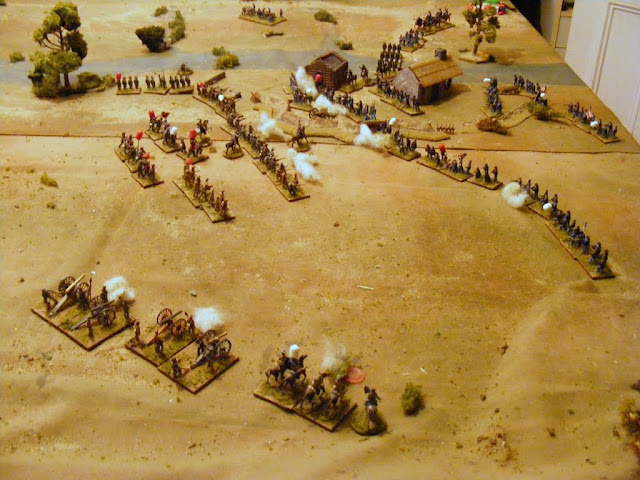 
As the Rebs started having to pull back to refuse their flank, the hits mounted faster than they could be rallied and regiment after regiment became Shaken and started heading for the rear.  (I brought back the term on the fly applying it to the new status of all stands disordered). I was about to call the game when finally the Rebs got a double move and made some rally rolls. A new line started to form. 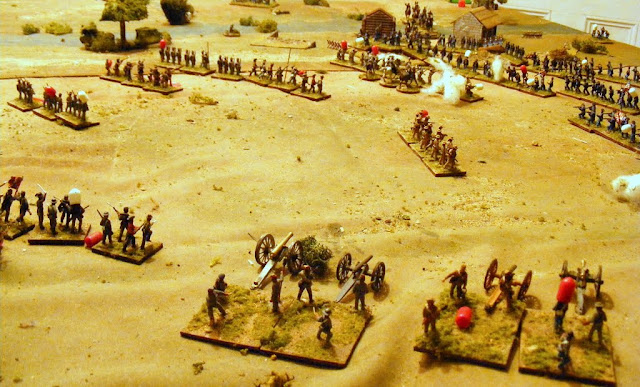 The end is nigh.

The hope was short lived. As one battery pulled back to find a safer position, the other was silenced (shaken) by rifle fire and forced to retreat. The imaginary limbers were about to tip over the edge when they finally rallied but as a second firefight raged on the plain below the Reb line broke again and the army hit its break point (now lowered to 1/3 losses), largely due to shaken units retreating off board. The army had been pretty much forced back past the exit they were trying to protect anyways so nearly a moot point.

As I started to run out of hit markers near the end and surveyed the field and all the markers, that light bulb pulsed again. Now that I had dropped the new 2 hits on a 6 rule, I didn't really need to -1 to disordered stands, in fact, I didn't need to know which stands had hits I only had to track hits vs the unit. Luckily I now had a term for having all stands disordered, it was easy to rephrase it, when a unit becomes shaken each subsequent hit removes a stand, just like when I was tracking a break point. The difference is that point is now 3 or 4 not 8 or 12. Because hits are rarer, the over all effect is the same with less bother. People can use a small die or counter to track hits or casualty figures or caps on stands, whatever they like.

So once again, another step back closer to the original game. A 6th version of the draft has been uploaded. There were some collateral damage to other rules, I think I caught them but it would be surprising if I didn't miss anything. the QRS has not been updated yet.

I think the next test will be a Grant TT Teaser or Scenario.