We've seen this scenario recently so I won't bother to describe it in detail. I merely substituted infantry for cavalry and light infantry and carried on. The units are all 3 stands except that the Rebs only have 2 cavalry stands so I threw in the sharpshooter as a 1 stand unit to balance things out. I ran the Yankee batteries as 2 gun units and the Reb's as single stands.The Yanks adopted essentially the same plan as Faraway but had the troops to carry it off. 4 regiments and the cavalry marched to attack the Reb right flank. 1 regiment skirmished on the right while 3 attacked up the hill after a short bombardment. 3 more regiments acted as supports for the attack. 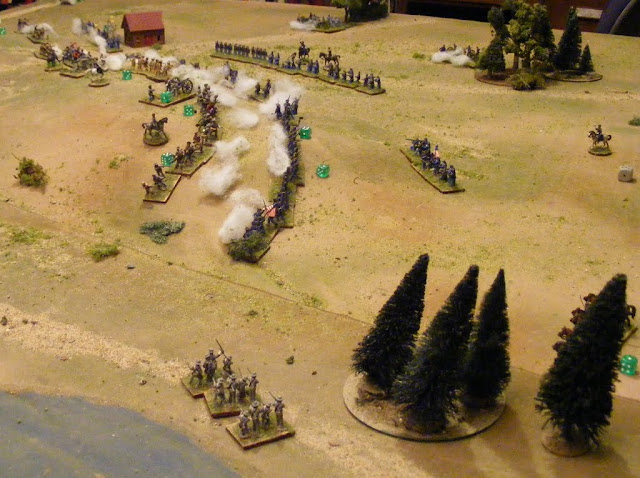 The battle heats up as the Federal Commander attacks aggressively and Confederate reinforcements begin to arrive. Its interesting how different the battle feels with the smaller unit footprint (about a 1/4 of that of the 40mm units) coupled with the longer ranges.

I was pleased with the flow of things and the "gotcha"s were gone but after a few turns, I discovered a  temptation to circumvent some of the rules in cheesy fashion. Now, all I had to do was refrain from doing so and all was fine but I'm happier when there is no benefit to being cheesy or at least no penalty to not being cheesy. After briefly pondering drastic solutions, I ended up just ditching the new "maneuver" rules and going back to some movement delays and let the rest fall as it may. To ease logistics, I made a slight amendment from shooting "at any time" to shooting when a unit is activated or the target moves or fires which is what I had actually meant.

Dropping the break point and its restrictions made things feel less artificial but the convoluted way I had rewritten the rally test added nothing but complication so I went back to nice easy 1/2 or nothing. The change to the shooting and reaction rules meant that units could try and rally while in the midst of carrying on a firefight which worried me briefly but of course they could not do so and charge or retreat and the -1 for being fired on etc was enough to make it hard to recover and regiments were shot apart fast enough that having the occasional one steady itself didn't hurt. I also kept in mind an ACW incident, was it Taylor's brigade at 1st Winchester? or someone else elsewhere, stopping to put the men through their arms drill under fire to steady them. Near the end I started to ponder Brigade morale again but it became obvious that stands in a badly battered brigade get removed quicker because they have no one to share the hits with. So, if a general pushes the remnants of a brigade forward or is unable to shield them from enemy attacks then his army will hit its break point sooner. No artificial intervening steps needed.

Essentially, once again, stripping out well intentioned finicky bits took the focus off the details of what individual units were doing and put it back on the over all sweep of battle. Much like in Morschauser's and Featherstone's old rules. Hmmpf .

The rules as played for the last 1/2 of the game have been posted. Please use the link at the the left if interested. 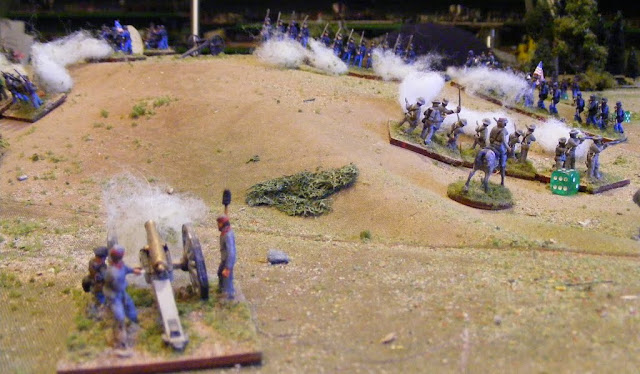 Getting back to the battle. As the Yankee first line neared the hill the Reb infantry came out of the dead ground to meet them and a fierce firefight broke out. On the Yankee left, the infantry ended up forming earlier than anticipated but the attack  was going well until Reb reinforcements arrived and flanked them. The  frontal attack had stalled with heavy losses but the second line passed through and charged. A brief but fierce struggle resulted with the hill, the guns and the intervention by Reb Generals tipped the balance and the attack was thrown back all along the line. More Reb reinforcements had come and were pushed forward  piecemeal but when the original Yankee first line renewed the attack, the prolonged fighting caught up with the Reb defenders and their line disintegrated with the army hitting its break point. Having the General shot in melee and a Brigadier over run by a Yankee advance didn't help. 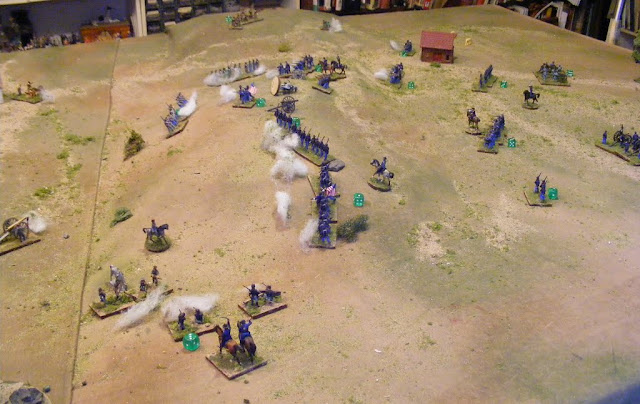