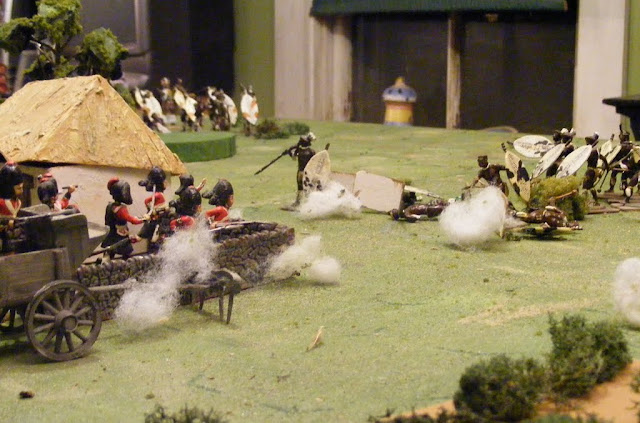 The White Shields, forming the left horn of the army, launch a probing attack on the walls. (The regimental name sounds much more impressive in the Nku Khu tongue but I'm not fluent in it.)

Lacking any reference to the defense of Kinch's Drift by the Black Watch, I turned to Rorke's Drift for inspiration. The garrison there was around 150 men. Taking that and the rough size of the post, I decided to use 1"=10 yards as the scale for this game. My 40mm figures are on bases 2" wide or potentially 3" wide  for irregular light infantry and cavalry.  Since my 54's were/are mounted with a 1" frontage this works rather well. So the Brits have 2 figures on a 2" frontage representing some 20 men in a single rank while each 3" base of natives  represents some 100 men in several ranks. Due to a shortage of figures as much as anything else, the Nku Khu stands are also 1 rank deep of actual figures.

I figured there was no reason knocking my self out to make the layouts the same so stuck a thatched hut in the middle of the table, added some stone kraals and a wagon, an out building, hill and some shrubbery, plus of course the irrelevant  river and called it that.

My CTA 24th Foot was long gone but I do have some Highlanders, old Britain's Gordon's iir in pith helmet but only 5 or 6 and their paint has suffered badly in the 80 or so years since they were first played with and I have been reluctant to refurbish them. I will though, and add to them!  The 93rd was next on my list since they are in firing positions, suitable for defending walls but then I realized that 24 spelled backwards is 42 so the Black Watch is now vigorously charging the walls from the inside.

After some pondering, given the small area and the need not to have 1 bad die roll spoil the whole thing, I decided to treat each stand as a unit with the whole garrison being treated as a Brigade.  There was also talking of setting up a field hospital but the stretcher bearers and nurse were buried in a box at the bottom of the cupboard while a piper and drummer were close at hand and the same effect under the rules. An officer on foot, the company commander, Lt. Caine is being treated as the brigadier while Colonel Hector MacDuff with his trusty sidekick Cu Mhor seemed worthy of the attributes of a Officer Commanding or General. All infantry are stubborn (4 hits per stand) and armed with breechloading rifles with an effective range of 40". The walls count as cover, the building as a fortification. (forgot, there are 6 stands of Highlanders plus 1 of local volunteers - the latter since they were at hand but I had already buried the remaining highlanders back in the closet).

Once I got the Nku Khu out of their box and sorted into their regiments, incorporated the New Britains' who were acquired after the hey day of the NkuKhu wars, and re-allocated the now shieldless figures who were resisting glue anyway, I ended up with 22 stands arranged as follows: OB:

All are irregular light infantry. I was going to treat the fire arms are inferior muzzleloading rifles but I seem to have removed that option so decided to just call them muskets. This does make it somewhat impossible to shoot down from the hill so I may just surreptiously slip the words "or inferior" in after the words "or firer is mounted". Since the stands can take 3 hits and there are 3 single figures representing each, I'll mark hits by knocking over figures unlike the Brits who will use the little dice.

Each Nku Khu "brigade" rolled to see what turn they arrived and at one point on the table edge. Once the army is reached, the table will be cleared and the next wave brought on if my morale holds.  The Brits are immune to army morale and will fight to the last man. If they beat 1 wave, it is a draw, if they beat 2 it is a winning draw, if they beat 3 then it is a victory and the Nku Khu will salute them and go away. 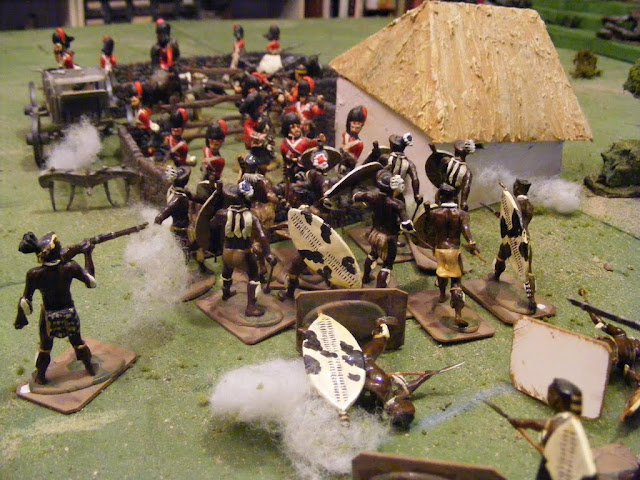 Turn 3, The first charge goes in.