Stranger in the Mess

One of the downsides of relying heavily on homecasting is when I  need to cast to keep painting and there is a lengthy spell of unfavorable weather so I can't cast in the woodshed and my wife is home so I can't cast in the house. One of the upsides is that when I cast, I usually end up casting more than I need so there is almost always a good supply of bits and spares. I wanted to start another battalion of British infantry, not yet cast but I also needed an 1839 Brigadier, so I dug into the spares.

Amazing how few uniform books bother to deal with Brigadiers in detail but perseverance pays. British Brigadiers are another sticky point for Red vs Blue armies, esp when facing Americans. The most common uniform for generals on both sides was a dark blue peaked cap, dark blue frock coat and dark blue trousers. One has to look closely at the details of trim to figure out who is who. Luckily, I have seen enough pictures of British Generals wearing cocked hats with their frock coat that I felt comfortable going that route. Body and horse from a Zinnbrigade Prussian Hussar with lance (since shortened to a telescope) with one of my heads replacing the fur busby, and some putty for coattails, sash and trousers. Base and gloss varnish to follow.

Without further ado, may I present....Brigadier General S. Glasse. 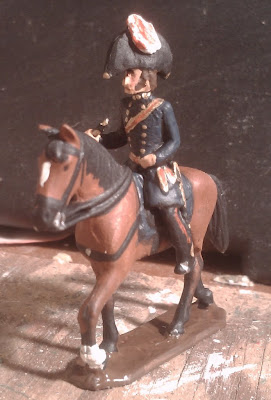