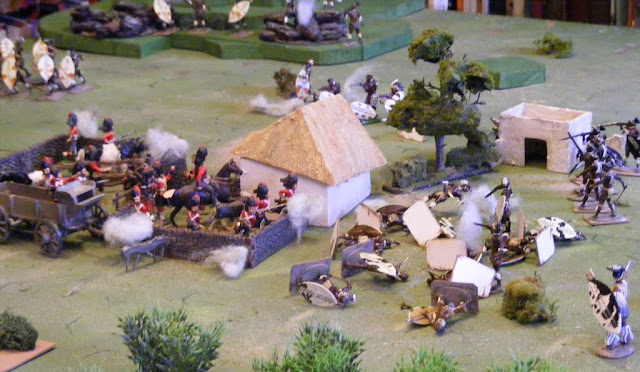 The Brown Shields move rapidly to surround the post while the Black Shields move up the middle from their position in reserve. Most of the White Shields have either "gone to ground" behind whatever cover they can find or are lying wounded on the field.

Once the witch doctors had rattled the bones and determined the appropriate sacred deployment of the Prince's army, the battle progressed quickly. The long range fire from the relatively large number of  Nku Khu firearms was no more effective than could be expected but every now and then a shot got through and the slow drain on the Scots was soon getting worrisome.

The first charge provided a tense moment as it looked like the center section of Highlanders was going to be defeated and forced to retreat leaving a hole (they took 1 hit and inflicted none)  even though the White Shields as a whole were also defeated having taken 3 hits and only inflicted 1. Luckily Lt. Caine had joined them and came through. The White Shields fell back behind their skirmishers but had trouble rallying until they voluntarily pulled back out of sight of the British. Their poor riflemen tried to keep up the fight but were unable to rally and were eventually eliminated one after another. The Scots, with 3 hits now, also had trouble rallying despite the Pipes and MacDuff was forced to pull them back to a safe spot and bring across fresh troops from the other side.

The Brown Shields moved around and charged the far wall which had been left momentarily undefended but the Scots got a section their just in time. A devastating volley was followed by some equally devastating  melee dice against an almost complete whiff and the Brown Shields drew back to the board edge to rally. They should probably have gone farther but rallied well. The next volley brought down their leader and they milled in confusion long enough to be almost completely destroyed by rifle fire.

That left the Black Shields. They moved up the middle and renewed their attack on the wall. Led by their Chief they rushed in and inflicted 3 hits on the poor replacement section. It must have been a weak spot in the wall! These had already been hit by fire and were removed. The first British stand loss of the day. The over all result was a tie though so the Black Shields fell back an inch, ready to renew the fight on the next turn. Before they got a chance to do so, MacDuff brought the Volunteers across at a run and a rapid and effective fire reduced the Black Shields by a stand bringing the Nku Khu Army morale to 0. The first wave was repulsed. 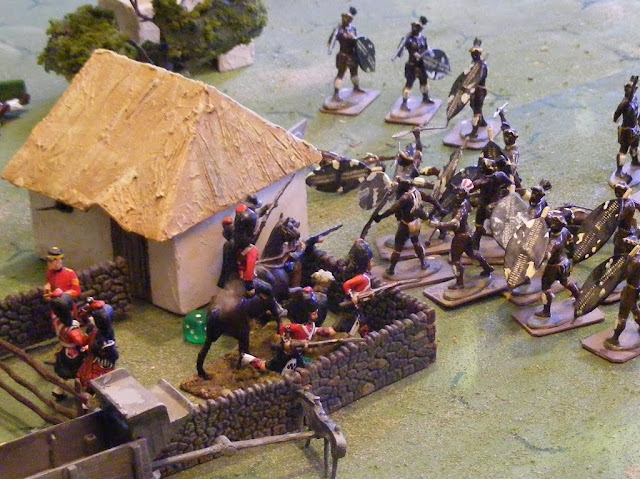 The QM is keeping track of ammo issued from his stores to the garrison.
Black Watch are recast Britain's (+ 1 of my original toys). Officers,piper, drummer and volunteers are from Reb castings molds. I forget who made the QM. Maybe Tradition but i have a feeling he was from one of the smaller companies, Little Legion maybe? or Imperial? )

The defenders only lost 1 of their 7 stands but 2 others had been nip and tuck with 3 hits and only poor shooting ability and good rallying during a brief respite saved them. If they had lost 3 stands, I doubt that they would have had any chance of repulsing the 2nd wave. As it is, the game is still in the air.

The rules worked well despite the low level of the game. It was fast paced with just enough to do and some tension at several points. Having the figures as singles rather than based was neither here nor there though I did catch myself occasionally thinking that having 1/3rd the number of bases of Nku Khu to move might be nice although that would have to be balanced against the ease and fun of knocking them over. It was nice being able to play a game without thinking, "I need a 100 more Zulus".... MacDuff is actually a little worried about all this.

The only down side is that I am now wondering why I want to do 40mm native spearmen when I already have these? Needs some thought but the time might be better spent refurbishing the old Britain's including some Brits in helmets and adding some more Nku Khu based on my one original Britain's Zulu, fixing the bases, painting up some NKMP and so forth so  that it is already to go when I get a Colonial itch. 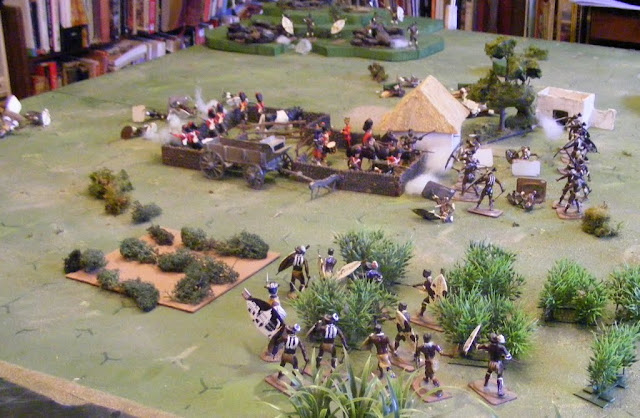 An overview of the end of the first wave. the White Shields have rallied in cover and despite heavy losses were working their way around to a weak spot when the command came to retire.

Alas, the British relief force is approaching and the Nku Khu have been forced to call off the attack.
(or in other words, George called to see if I was up to host a game tomorrow so I need to reset the table and come up with a good scenario with some maneuver options for both sides. But do I go with 20mm ACW again or 40mm Atlantica? George isn't keen on cavalry so maybe I'll go for the latter heh heh heh.)