Pressed into The Service


Alright, enough of the serious (?) stuff. I was trying to figure out what to paint next. Finishing off the Royal Fusiliers would make sense and I have 6 castings waiting to be cleaned up sitting on my desk. Obviously that's out then. I have plans to do some Colonial games so something in that line also made sense and I have some castings to be converted. Then I remembered that I recently stuck my neck out and offered to run an Aroostoock War wargame at Huzzah in May (another reason to finish those Fusilers damn it)   and worse, in a fit of madness I made it a slightly VSF game. Just the balloons and an armoured train. Well, Balloons, including the double balloon steam driven airship that Lawrence made and which I have yet to paint up. Just the thing with which to seize a bridge over the Neverwaussie River. Which left me imagining, in a context of British forces in Canada in 1839, who would be most likely to man an air-ship? Ship? Ahhh what's a colonial game with out a naval brigade?

But what should they look like? I could have dug for a proper reference but something close enough was close to hand. 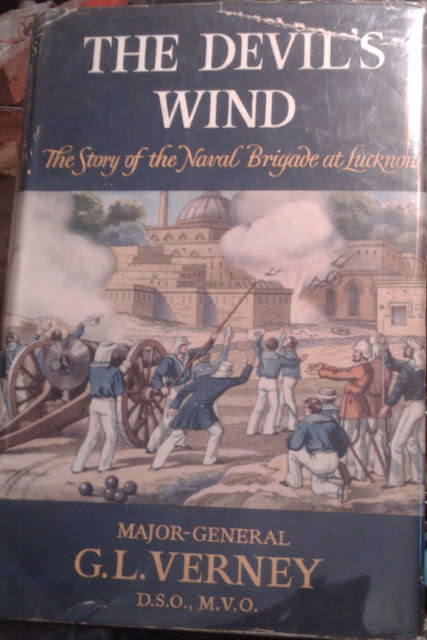 As an added bonus, there's a local connection. William Hal VC, a member of the HMS Shannon's landing party at Lucknow, was Canada's first VC winner. As it happens, he was born just across the Kennetcook River and up the coast a few miles and is buried just across the Avon river. (I live very near the junction of these 2 rivers.) 1857, close enough for me.


So..... if I were to take one of my pirate castings, get rid of his sash and head scarf, turn his ragged pants into bell bottoms and add a seamen's collar and straw hat, he should do very nicely. I think the pirates were actually one of my better creations anyway. Not necessarily the best masters but they translated into metal better than most of them, probably something to do with a sensible pose and less detail therefore fewer undercuts. 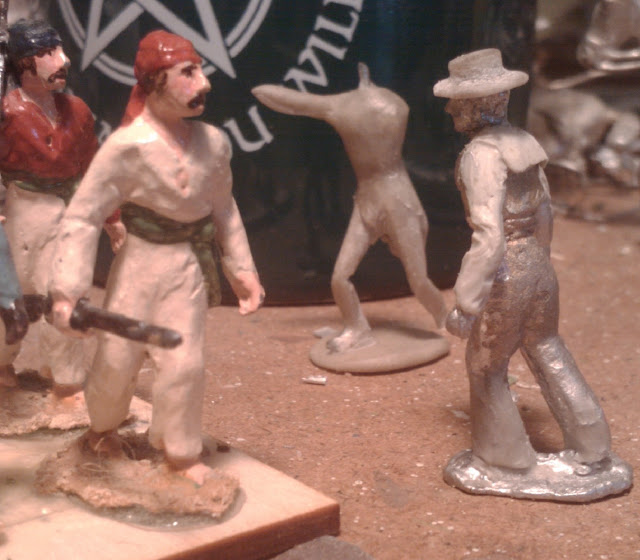 So all I have to do is make a cutlas and make a mold. He'll be empty handed as the main need will be for gunners and working crews but won't hurt to have some cutlasses and muskets on hand just in case.
(For the curious, the skinny chap in back is trying to earn a commission in the American army. I'm trying to make him compatible with the Scrubies since they have no officers. Of course for an American, its tight pants, long coat and bicorne. Should be close enough to convert to an 1812 Brit but if he turns out ok,  I'll give one trousers and a Belgic shako, cut down his coat and cast some 1814 British officers.

And before anyone gets excited about Colonials, single figure skirmishes and Macduff, the plan is to use Hearts of Tin but I need to make enough natives to test the premise. 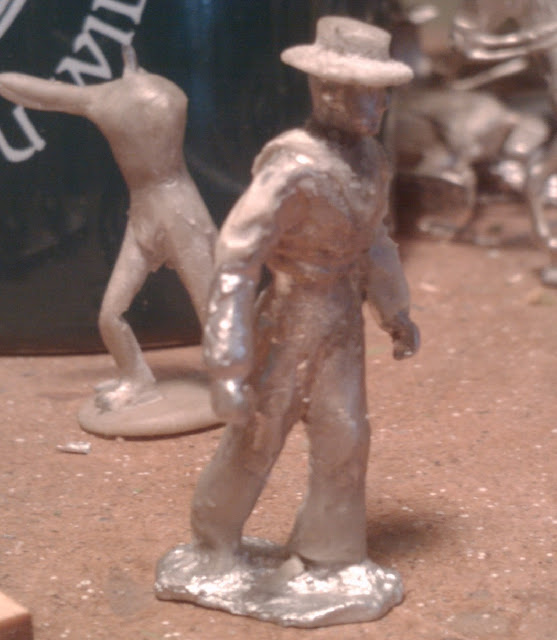