Son of a gun

Its definitely time to start trying out some Henry VIII scenarios for Huzzah. I want something a little different than a head on bash if I can but first I want to get in at least one more game of Hearts of Tin while my mind is still on it. Especially before turning to Rough Wooing which is similar enough to confuse me.

I wanted something a little bit larger with a few more infantry. Apart from any rules issues, I'm still wondering if 3 stand infantry units wouldn't fit better and be better for scenario balance. That would also give all of my units a 6" frontage, not that that really matters. Anyway, I was flipping through Stuart Asquith's Solo Wargaming book when my eye fell on the latest Battlegames. I vaguely recalled seeing a Napleonic scenario by that young Kinch fellow which I had put aside for later. I also recalled my original intention of playing all of the Battlegames scenarios. So, I broke it out. There we are, C&C Napoleonics unhuh, and those lovely 20mm armies, yup, ok and HENRY VIII?!  EH!? hmm this might actually do for Rough Wooing quite nicely! I got the table set and was laying out some Demi-lances and Border Horse  when I remembered the objective. OK then, something for the weekend. 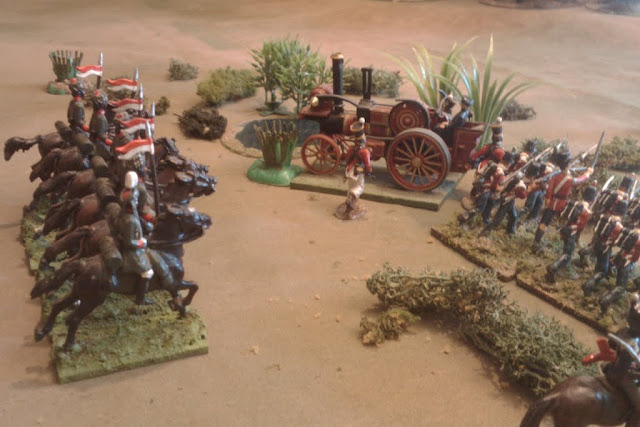 The Mary Jane is the most sophisticated piece of technology in Atlantica. Driving her down to that pond in the hollow to refill the boiler may not have been the smartest move, especially this close to the border, after all that rain.........

Meanwhile to get everyone in the mood, Corb Lund and the Hurtin' Albertans