Rallying to the Cause 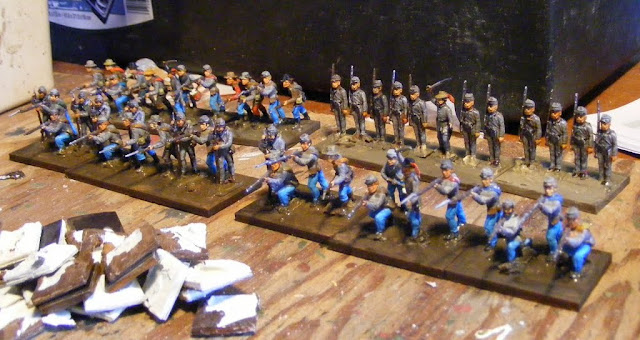 My Reb army was hard hit in their last game, and I decided that I needed to reinforce them before starting a mini-campaign. It was at this point that a parcel arrived in the mail.

A little while ago, I received an email from author, blogger, dilettante  and gamer extraordinaire, Mr C Kinch, esq.  Having noticed my slowly growing collection on 1/72nd ACW, he offered to send me some figures that he had bought for a lapsed project. I was expecting more raw material, maybe a few primed figures etc so imagine my surprise yesterday when not only did 2 Brigades of infantry, a regiment of cavalry and some pioneers and gunners show up, but  a brigade's worth of Reb's were already painted. All they needed was a quick touch up here and there but I gave them a series of quick washes to help them blend in with my troops, rebased from their single to my 40mm wide bases for HofT.... and.... Voila!.

Two hours work this morning and my Confederate armies are now on an even footing with my Union forces with 12 regiments apiece. I just need to flock and and add a mounted officer and flag before sending  Kinch's Irish Brigade into action. I foresee an ACW mini-campaign beginning this week.

A big THANK YOU to Conrad for his generosity.
Posted by Ross Mac rmacfa@gmail.com