Bits and Bobs on Hoft, scenarios and the mini-campaign

Today its back to miscellaneous musings in random order. 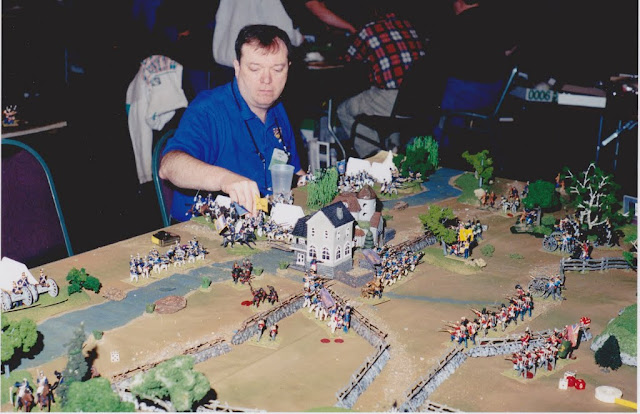 Duncan takes charge of the 1812 US forces crossing the Neverwaussie River. This from one of the earliest outings of Hearts of Tin (then known as Morschause Meets MacDuff) at either Cold Wars 2004 or Historicon 2005?  I'm sure I have the info somewhere........  54mm figures on 60mm square bases.

There were 3 main reasons that I decided to try one of the mini-campaigns that were offered up in response to Jeff's challenge; to try the rules, to see how it worked and for fun. I chose Steve the Wargamer's version for 2 reasons, firstly, it was first, secondly, I had enough units to do it using my 40mm fictional armies.

What do I think now that its played? Well from an objective POV, I had a great deal of fun. These were among the best solo games I've played.

As a mini-campaign, it worked like a charm. Several times the campaign format affected my battlefield decisions (in all but the last game) and the way the games were strung together with consequences helped develop the story and each game affected the challenge of the following ones as the forces were affected. I have to admit, I had my doubts at a couple of points since the follow on games originally call for a larger forces that the attacker starts the campaign with. Luckily, as Steve appears to have anticipated, the advantages wrung from a successful storming of the camp balanced that out. If the assault of the Princess Charlotte Dragoons had gone wrong in the first game, I might well had been forced to call up reinforcements for the Queen's troops for the last game at least, but it all came out right without any fudging from me. ( Not all Oberhillsian officers and supporters are in agreement with that last bit I hasten to add.) Hats off to CS Grant for writing the scenarios and to Steve the Wargamer for judiciously assembling these 3 into a mini-campaign.

As a rules test, it couldn't have been better. It gave a good work out to various aspect of the rules and confirmed my over all impression that this is the format of rules, organization etc that I have been trying to assemble for ..9 years now? I did find a few minor issues that had either been insufficiently tested or that arose  from unforeseen situations, which is what play testing is all about. More on the rules later. 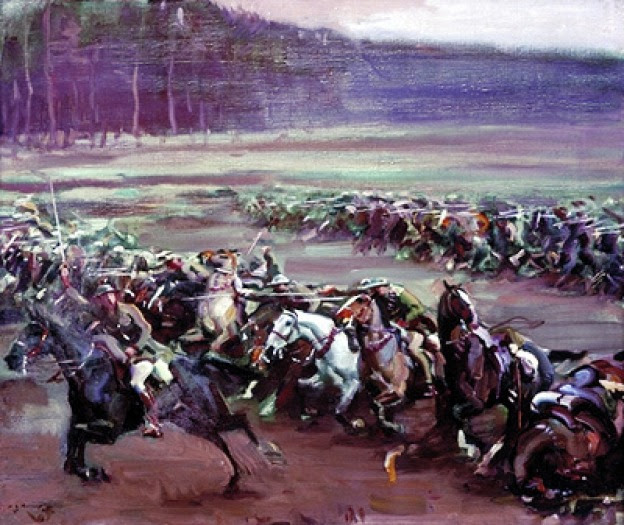 THE CHARGE OF FLOWERDEW'S SQUADRON Painting by Sir Alfred Munnings
(This picture is taken from http://marysweddingdramaturgy.weebly.com/gordon-muriel-flowerdew.html)

I usually try to avoid using real names for fictional characters but as I was posting the picture of the Princess Charlotte Dragoons breaking the 2nd Infantry's square, it struck me that that sort of event called for a hero to be named in the papers but I was stuck for inspiration. I usually rely on something about the figure, a pose, a distinctive feature of dress or manufacture. It briefly occurred to me to look up names of officers from KGL at Garcia Hernandoz or the 16th Lancers at Aliwal but went for something closer to home. The charge of C Squadron of the Strathcona Horse under the command of Lt. Gordon Flowerdew V.C. at Moreuil Wood in March of 1918.

3. Units size, Basing and Table Top Teasers
Basing and unit organization for wargames is a bane of my existence. One of the early decisions about HofT was to make them as basing indifferent as I could. By and large I think I have succeeded, barring extremes. I have played games with a mix of based and non-based figures as well as a mix of basing styles with differing sizes and numbers of men.  Periodically I have included some examples in the rules, based on alternatives that I have tried but I am leery of creating a false impression that they are "recommended" or worse " official". However, this should be a safe enough venue.

there are 3 main considerations for organizing and basing troops for wargames:
- Historical Precedence
- Aesthetics
- Game Mechanics

I'll skip right over why these things are all easier with singly based figures (lalalalala) as there are other reasons for using multi-figure bases and I don't like having basing  decide the rules. I'll also skip over historical precedence since while I have taken it into consideration, I'm not letting it rule. Aesthetics is very personal and is also affected by figure and table size. My choices for HofT would be different if using 10mm figures on a 6x10 ft table than it is for 40mm figures on a 5x6 ft table. This brings us to the main point.

While Grant's Table Top Teasers did not specify a rules system and can be easily adapted to different scales, rules and periods, its fairly obvious that many of the early ones were designed with his father's rules in mind. This is reflected in the brief guidance to units in Scenarios for Wargames that light infantry and cavalry units should be about 1/2 the size of line infantry and that batteries consist of 2 guns.

In his rules, Morschauser recommended 4 infantry or 2 cavalry figures to a base and with my 54mm armies, I followed this but used only 2 figures for light infantry. This allowed me to nicely field the same number of bases for all units while still following the guide that cavalry  and light infantry units were 1/2 the size of line infantry! After all, some of the scenarios where forces may be chosen equate all types of units indicating that the smaller specialist units are considered  equally valuable as the line infantry regiments. For aesthetic reasons I have chosen to go with 6 infantry figures on a 2" wide base. When I tried basing my semi-flats it was easy enough to put cavalry and infantry on an equal frontage but it won't work with fully round 40's.

I was left with 2 options, fewer cavalry on an equal frontage or the same number of files on a wider frontage. The same applies to light infantry, if crammed 3 wide on the same frontage as line infantry, they will not look like skirmishers.  An equal frontage for all units, would be both pleasing and true to Morschauser but I cannot fit a 40mm gun and crew on a 2" frontage. I have managed to make 3 light infantry fit ok but they do look crowded. After a  side discussion on basing today, it occurred to me that with HofT, equal frontage was only a "nice to have", not a necessity.

Some quick experiments have shown that 3" wide bases will accommodate a gun and crew, 3 cavalry and 3 or 4 skirmishers. They would also hold 8 line infantry which probably would have been ideal but having just rebased 8 regiments I have no desire to do it again right now and anyway, I prefer 4 stands for infantry for staying power and forming "attack" columns and squares but don't want 12" wide units on my small table. The experiments also showed that 3x3" cavalry bases form a good opponent for 4x2" infantry bases. So how would that fit my organization? Well, as luck would have it, my current organization was adopted when I was wavering between Charge! and Morchauser's 5 stands per unit. With an eye to either single figures or 2 cavalry per stand, I painted up an officer & 8 troopers (Charge!) and added a trumpeter to make 10 figures (Morschauser).  The campaign games were played using 4x 2 man squadrons plus a trumpeter as marker.   This left 1 figure per unit on the shelf. A 3 squadron (stand) organization + a marker would nicely use up all 10 figures without requiring more. An ideal situation.

So, not yet elected but leading in the polls and declared likely to win is the following standard for my 1840's armies. (My ACW is quite different.) Each of these will be considered a "unit" for scenario purposes.


Brigades will normally consist of 2-4 units including artillery with 3 infantry or 2 cavalry being ideal.

4. Markers. Markers are useful rather than compulsory. I'll use anything that works but prefer things that look at home on the table. Recently I have taken some inspiration from BlueBear Jeff and am using drummers etc to track both unit status and casualties. Pending the acquisition of dial bases, I am using a bit of putty to hold a small marker die to the drummers base to track casualties, this helps prevent them from getting lost or "cross attached" to the wrong unit.  Equally as important is whether or not a unit may react. At the start of each turn, all drummers are to be placed behind their units. If the unit carries out a retirement, formation change or other "maneuver" etc then the drummer is placed in front of the unit to indicate that it cannot react. Shooting and melee are still being  marked by placing white fluff "smoke".

A discussion about what the play tests indicated about the rules will have to be another post.