There were lots of more important things to do today than convert a wagon into a steam propelled mortar battery. 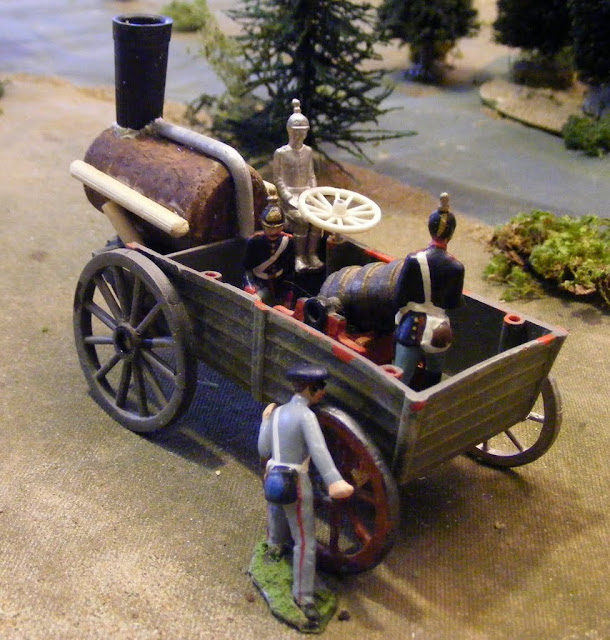 A dollar store cowboy wagon with new wheels and scraps of this and that. The new Zinnbrigade crew will eventually wear smocks and peaked caps.

I originally planned to armour this thing and arm it with a light gun but while 1839 puts it after the first commercial steam driven off road vehicles, I think its too early for steel plating and even a light gun was presenting me with theoretical issues around recoil and muzzle loading without going outside the wagon (no room for "running in"). Some experimentation led me to try the mortar and it made sense. Field guns are mobile enough as is, the steam propulsion wouldn't help much but mortars are awkward to transport  and there are naval Bomb Ketches to provide an example. 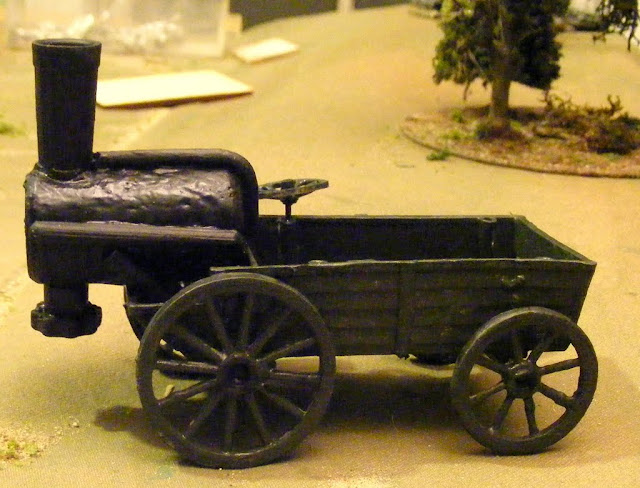 I'll need to lighten the olive green wagon body I think and add some detailing and hopefully some brass.

Rebasing is going well, after much experimentation and cyphering here' what I have settled on:

Infantry: 4 bases each 2"x2" with 6 figures  (in theory, some bases are short a figure). Some battalions have one stand split in half with 2 figures on each half so that they can detach skirmishers.

Light Infantry: 2 bases each 3" x 2" with 3 skirmishers or 4 militia. This is for small detachments that will not form in close order.

Cavalry: 2 bases each 3" x 2" with 3 cavalry. This should be 2 small squadrons at 1"=25 yds but could be right for 1 large squadron at 1"=20 yards so I'm going to call it a squadron. This means my largest cavaklry force will be 6 squadrons so I'll do 2 instead of 4 per regiment..

Artillery: 2 bases each 3"x4" with a gun and crew. Often deployed as single guns.

This is obviously quite different from my 1/72nd  basing & organization but the good thing is, almost anything works!

For teasers I need to experiment but am leaning towards each of these being a scenario "unit" with a gun = a gun.  This gives me light infantry with 1/2 the bases rather than 1/2 the number of men but I think the effect will be about right, maybe.

Tomorrow I need to clear the table and reset.