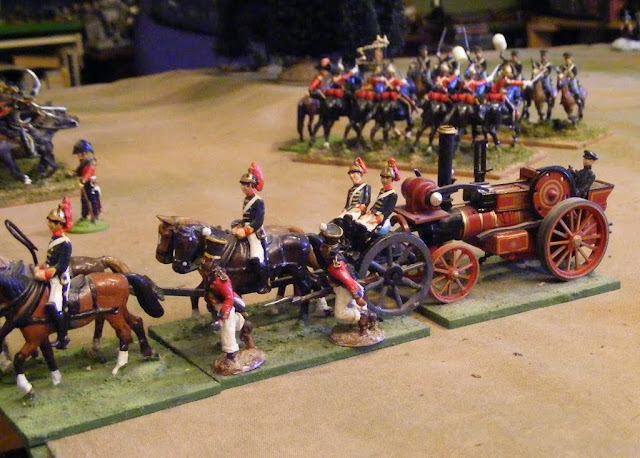 A Four Horse Power Engine is it?

Oddly enough, one of the very first pieces I recruited for a fictional mid-19thC wargame, was the Mary Jane, a steam tractor and one of the first scenarios I planned  was an attempt to rescue her. At the time it was going to be a MacDuff skirmish with companies not battalions and I never got to stage the game but here we are, I've played a rescue now!

I'm afraid that you'll have to pick up a copy of Battlegames #28 to get the full scenario details  but you'll get to see my pictures and report on a French & Indian Wars scenario as well. 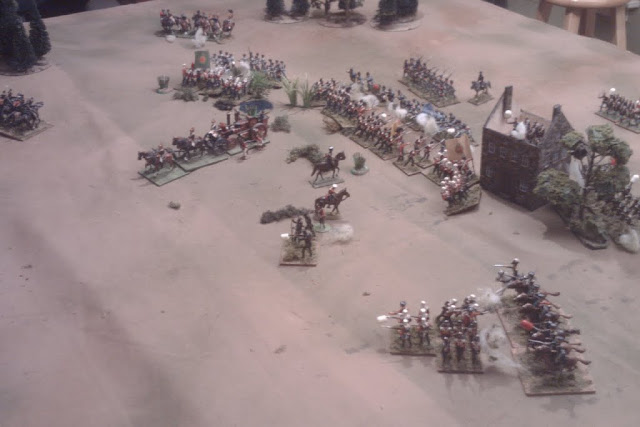 The climax of the battle, the Blue Dragoons have charged a converged Grenadier battalion in square. Despite the best efforts of the Grenadiers, the square holds. Just.
("Who knew the old men had so many ones in them?")

After 3 days of typical Nova Scotia mid-summer weather, which just happened to have arrived in March which is usually considered part of Winter here, I was tired from unseasonal yardwork and might have been better sitting with a book but I decided to get the table set up. Then I decided to roll  a few dice. Then a few more. Red had a solid plan but I'm not sure Blue had a real clear picture of what needed to be done till about 2/3rd of the way through the game when he seemed to come alive. or maybe it was the after dinner coffee kicking in.

This was another one of these games where Red was pretty much cooked and eaten for dinner by Turn 4, Blue was washed up and hung out to dry by turn 6 and victory hung in the balance on turn 9 of a 10 turn game with a desperate final charge being repulsed all along the line but real victory or defeat lying in one last even odds cavalry charge. 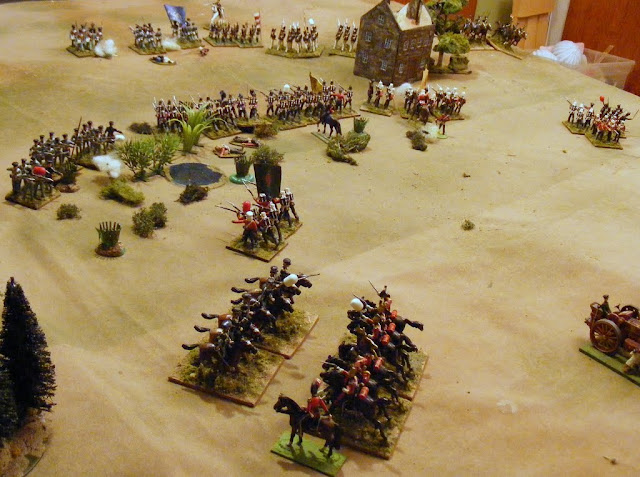 .
So what about the  main reason for playing? On turn 3 I started to fret that the Rally numbers were wrong but by turn 6 it was plain that they were just right. A delicate balance of hit numbers and rally numbers gave just the right balance to the game. You can't count on any one volley or rally going one way or the other but you can be reasonably sure that in large masses the fight will be prolonged before one side crumbles, usually. Every now and then there is just a chance that things will go pear shaped so you can't really relax. But on the other hand, on 3 separate occasions during the game, cavalry units defeated in melee and shaken were perched on the edge of the table needing to roll at least one 6 out of 2 dice to avoid routing off table, and made it! So you can't count units out until they're out either.

So there's one game with no changes, two really since it was just an oversight/typo correction after the last game but I'll be strict and count one.

About 1/2 way through the game, it occurred to me that I have some 1812 casualty figures so I began substituting  these for the dunce caps and they worked well, easy to track and slightly more photogenic if more gruesome. I seem to recall people using printed out 2d markers but since I have all the home casting gear spitting out 2 dozen generic red and blue casualties should be easy. I'm still not quite sure what to use the lose drummers for, perhaps to indicate units that MUST rally.

As for the organization change, I hate to admit it, but it worked fine. The cavalry and light infantry are big enough to be dangerous and small enough to be both mobile and fragile. The line infantry are robust enough without being too tough meaning a decision is possible in a reasonable time. When I tried  3 x 3" stand cavalry/light infantry, they were just too unwieldy while the 24 man, 4 stand infantry units may look good but at 8" per unit, they eat up just a little bit too much table space on my little table. Three stands don't make as neat a square or attack column but my guys mostly fight in line anyway and I can live with that.

I'll leave the fourth stand on units like the Blue Guards for those cases when I want some larger, non-standard units for some scenario and field the rest as 3 stand units. I'll have a few spare cavalry in a couple of the units and will have to decide which to build up into a 2nd squadron and which to place in reserve. But in Atlantica, all new units will be raised to this standard: Line infantry, 3 stands or light infantry/cavalry/guns, 2 stands.

OK on to Rough Wooing but in the meantime, in honour of the final, deciding  Dragoon vs Dragoon charge here's Corb Lund again with Horse Soldier Horse Soldier. I mean  how often to you get a song with lyrics like "I was fustest with the mostest when I fought for Bedford Forrest"?   (and after all,  why should I be the only one with an ear worm? "I'm a Hussar I'm a Hun......)