A Practical Solution or Subliminal Conditioning? 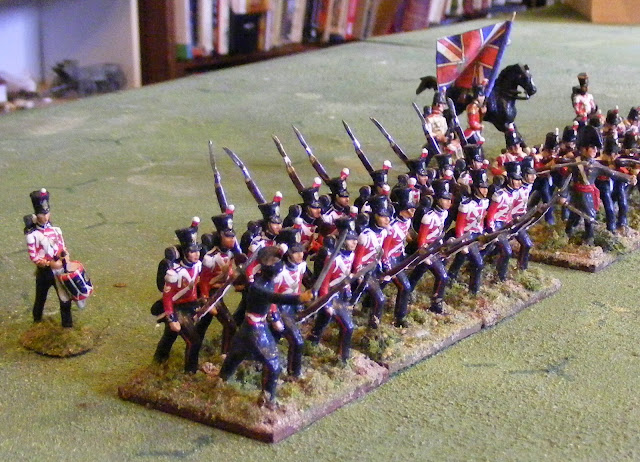 The Royal Scots finally up to Battalion Strength and a Queen's Colour to boot!

Settling on an organisation  for my 40mm 19thC Toy soldier games has been just as hard as settling on rules. In the beginning there were 3 main contenders:

The key considerations were looks, functionality wrt to game play and what would fit on my table (which was 5'x9'). Basically the choice would come down to unit frontage x number of units vs my table size and scenario design. If playing Grant Teasers, there is a lot to be said for being able to field sizeable wargame units 1 for one although this is not strictly necessary.

Things had been coming together nicely with a choice of 5x4 man stand HofT units until the moment in 2009 when I realized that my planned armies were going to be too much for my eventual table and I went into free-fall mode.  After many trials and dead ends which have been chronicled on this blog,  I finally decided to settle on 3 stand HofT units with 6 figures per 2" wide base. Not all that different from one of the original options, just an inch or so smaller frontage.

Over the weekend, I started work to bring all units up to scratch starting with 6 more Royal Scots including a Queen's Colour. That gave me another pause as once mounted on the stand, the unit is either British or Faraway. It can't swing back and forth. I think small units with lots of flags look silly so with 3 stand units, I figured to go with 1 flag or possibly 1 pair of flags per brigade.  To make life easier, I removed the ensign with the colour from the stand and painted up another private. Having separate stands will let me substitute Atlantican colours. Then I laid out the brigade with drummers behind the units hmmm. I now had a Brigade with mounted officer, colour and 3 sub-units each composed of an officer, sergeant, drummer and 16 bayonets. Hmmmm that sounds familiar but it looks pretty good to me. Sort of natural really.....

How about that, except that its a HofT Brigade and has a frontage of only 18" instead of 27" thanks to the multi-figure stands in place of washers!