After the recent troubles in the Blue River Valley, the Government dispatched a military expedition to arrest the leaders of this revolt and seize caches of arms and ammunition. We have this report from the field. 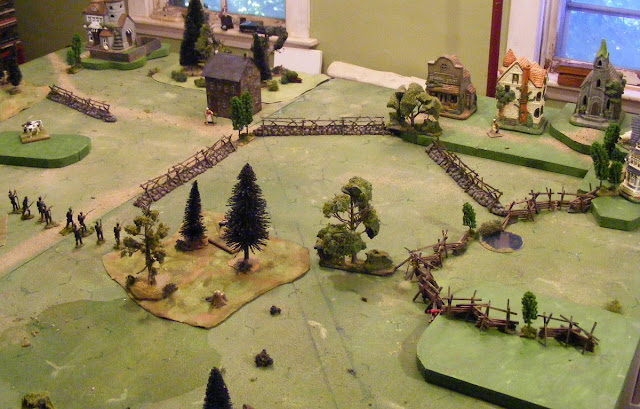 The Queen's forces approach Bois Vert (to the right) and the Mission (off to the left ).
The livestock and non-combatants represent possible Rebel units.

We left Belmont early on the 3rd of September. No one seriously expected trouble but this area had been a popular recruiting ground for the FTC Voyager Companies and there if there was trouble, there were bound to be veterans amongst the Rebel companies. General Glasse took no chances and deployed two companies  of the Victoria Rifles in skirmish order as an advance guard.  Four companies of the Royals followed by a 9 pounder and then four companies of the Dover Regiment. 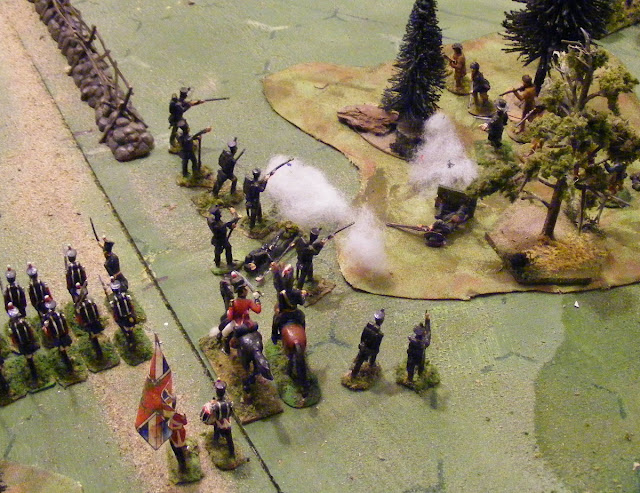 The Rifles respond to an ambush but take heavy casualties.

About half a mile from  Bois Vert there was a patch of woods that ran down close to the road. As the Rifles approached the woods a ragged volley rang out. Wheeling sharply right, the Rifles returned fire and entered the wood. Leading the Rebels, we could see a tall man in black. Waving a book in one hand and an old sword in the other, he passed up and down the line, holding the men to their work and no bullet seemed to be able to touch him. 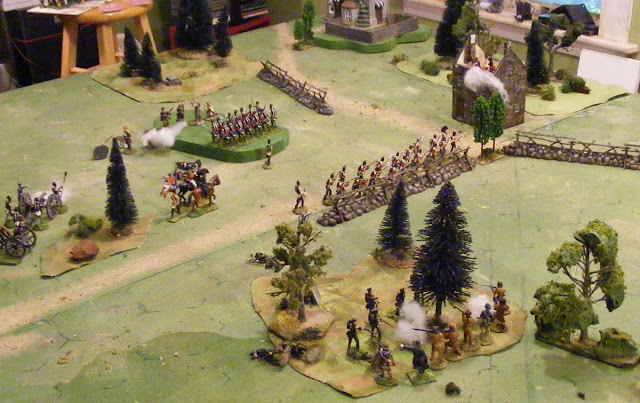 The rebels from the Mission are driven off by canister and musket volleys.

Completely unfazed by a bullet which whistled past his ear, (ed: chance card) General Glasse deployed the Royals and sent them to search the Mission while the Dovers were sent straight down the road. As the Royals approached a small rise, a group of Rebels appeared out of the dead ground and pushed rapidly forward around their flank. Quick as thought the Nine Pounder unlimbered and poured round after round of canister into the rebels while the Royals wheeled left, fixed bayonets and drove the remnants into the woods. 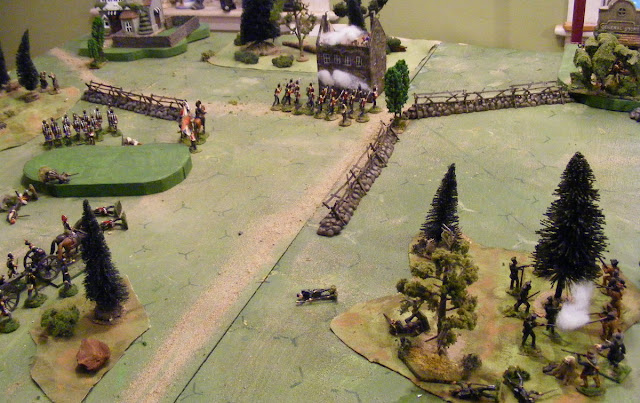 The Rifles are shaken by heavy casualties as the Rebels stop retreating.

As the Dovers approached a sturdy stone house at the crossroads, a fresh fusillade erupted. Hurriedly deploying line they returned a lively fire but the enemy had a strong post. An officer was sent back to fetch the artillery.

To their left, as the Royals approached the abandoned Mission, two fresh companies of rebels came rushing down the road. (ed Another chance card.) If they deployed into the Mission, we could expect a stiff fight. To everyone's surprised, instead of turning into the mission or deploying into line, they rushed straight down the road cheering and firing into the air. (ed failed control check) The Royals waited steadily then unleashed a devastating volley, leveling the front of the column and bringing it to a halt. Without pause, the Royals leveled their bayonets and charged.  Surprising everyone again, the Rebels did not flee at once but stood and traded blows manfully for several minutes before fleeing. 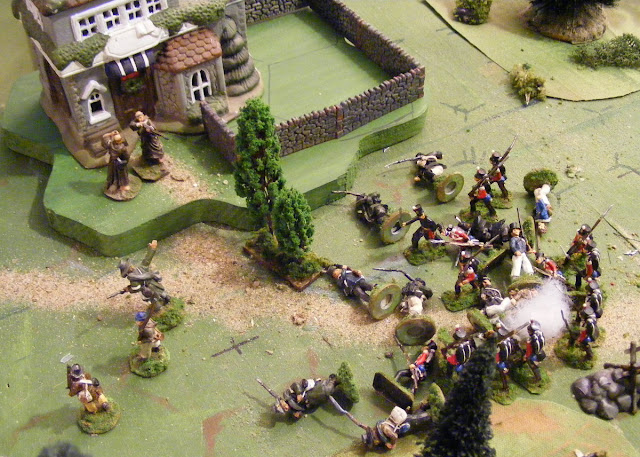 Rebel reinforcements are driven off with the bayonet.

The road to the Mission was open but in the confusion as the officers tried to rally their men, the regiment fell back several hundred yards. (ed: Another bloody chance card).  By the time it was all sorted, a small group of rebels had reoccupied the mission but the Royals soon drove them out again. A quick search turned up nothing but it was obvious that there had recently been some high status guests who had left in a hurry. The defenders had done their job and held us long enough for them to get clean aaway. 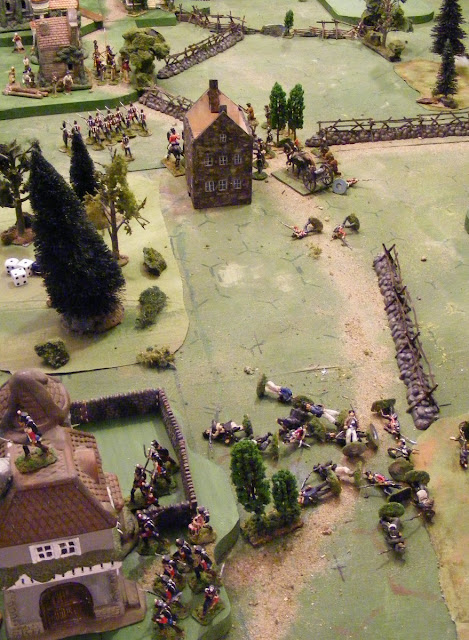 The Dovers storm the Stonehouse while the Royals sack the Mission.

Back at the crossroads, the gun had pounded the rebel stronghold and they were seen to waver. The Dovers fixed bayonets and a party forced their way in and captured the last remnant.  Suddenly all was quiet but the silence was soon broken by a ragged volley and wild cheering from the woods. Moments later a scattering of riflemen burst out of the wood and ran down the road for a short distance before their Sergeant could halt the men and begin forming them again.  Moments later, the tall man in Black appeared at the head of his men. Still waving and yelling he led them, not towards the rallying riflemen but towards the rear of the gun! 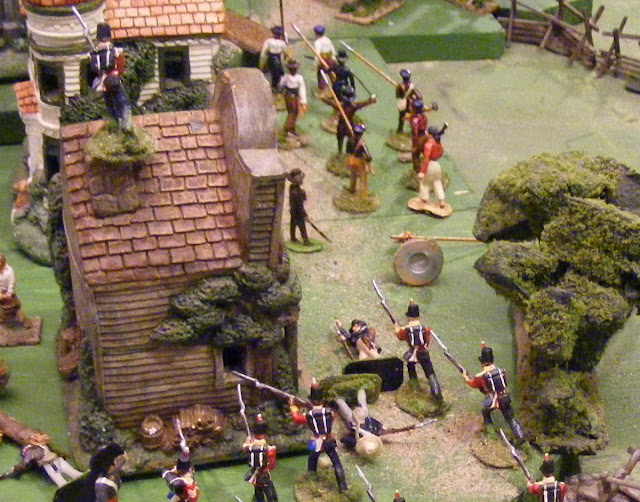 The Dovers push on to seize Bois Verte.

Leaving the gunners to handle the approaching rabble, the Dovers pushed on towards Bois Vert. Wheeling the gun about, the gunners calmly unleashed round after round of canister, bringing the approaching rebels to a halt. A ragged volley rang out from the buildings and streets as the Dover lads approached but with a cheer the men rushed forward, bayonet crossing with homemade pike. Again the rebels fought hard and did not run but again a  second push did the job. Suddenly, all over the field the rebels were running. The tall man in black, the infamous Father Michael we presume, was the last to leave the field. Turning to face us,  he held up his book and sword. We couldn't make his words out clearly, but it was obvious that he wasn't blessing us.

Little of interest was found in the buildings but the tracks of many pack mules and carts could be seen heading from the empty General Store into the woods. We collected our dead and wounded, torched the buildings as a judgement on rebels and a warning to others, and headed back towards Belmont. Much blood had been shed and little accomplished. I fear this rebellion is far from over.
Posted by Ross Mac rmacfa@gmail.com