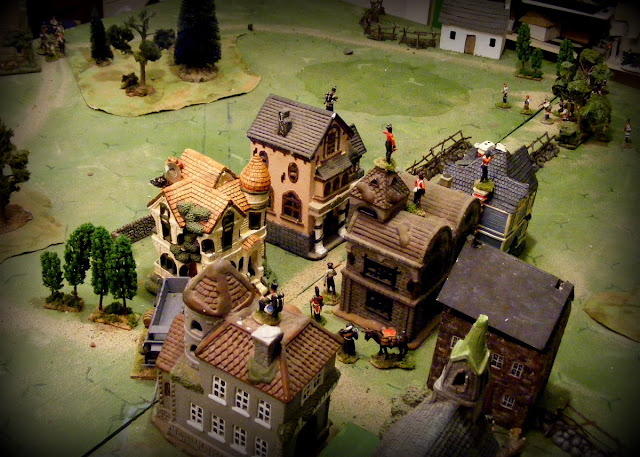 The town awaits attack. The rebel advance guard can be seen on the Belmont Road at the top. to the left is the road to Newport and to the right, the road to New Dundee.

On Saturday night a dusty courier arrived with news of the march of a strong column of rebels on the armory here in Brooklyn. Concern if not consternation was widespread amongst the citizens and many loaded their most precious possessions and headed for the coast. Colonel MacEachern, the senior officer, was cool as cucumber and quickly set about putting the town in a state of defence despite the small number of men at his disposal. Fortunately the usual company of guards was supplemented by a detachment of York Volunteers who had arrived that afternoon and by a company of sappers that had accompanied the Colonel. Messengers were sent to Newport requesting immediate reinforcement and work was started on barricades on the major roads. It was as well that the work was so readilt undertaken for fairly early on Sunday the rebel skirmishers appeared, first on the Belmont road to the east and shortly thereafter, on a small farm lane to the north. 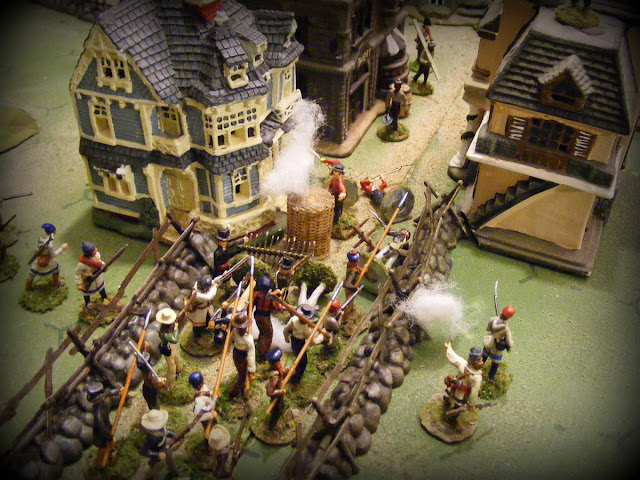 The first rebel charge is held, just. Two casualties aside.

The rebels pushed forward and opened fire which our troops manfully returned. The main body however hung back while the party to the north disappeared into a small wood. It was almost like the rebels were waiting for something. When dust clouds appeared on the road to Newport, we feared that they had worked around and cut us off. Soon, however, lookouts on the buildings called down that they could see the flashes of bright bronze helmets. It was the Princess's Dragoons riding to our rescue! Huzzah! We were not abandoned or forgotten! The aproach of the Dragoons was like a signal, down the Belmont road rushed a mob of rebels brandishing pikes and muskets, yelling like fiends. The Ordinance Guards stood manfully to their barricades though outnumbered four to one. Their volley cut a swathe though the rebel ranks but on they came. Soon it was pike and bayonet on the barricades with  fierce hand to hand combat between redcoat and rebel. For one horrible moment it seemed like the rebel tide would sweep over the redcoat breakwater  but then they pulled back, just a little, as if to gather breath. Then, with a roar,  they charged again! 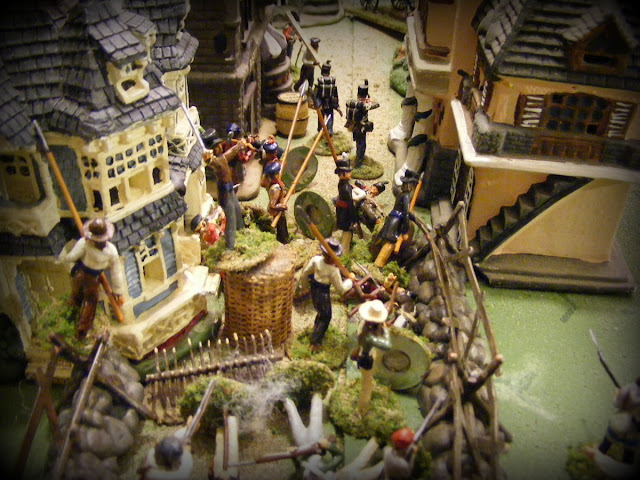 The redcoats stood to their posts to the last but the rebel tide swept up and over. Down main street it surged, right over a company of York Volunteers and down to the armory where it beat upon the door like a hurricane. Manned by the sappers, the doors held and eventually the tide faltered and then ebbed as the rebels ran back down the street leaving the bodies of their comrades to mark their path. 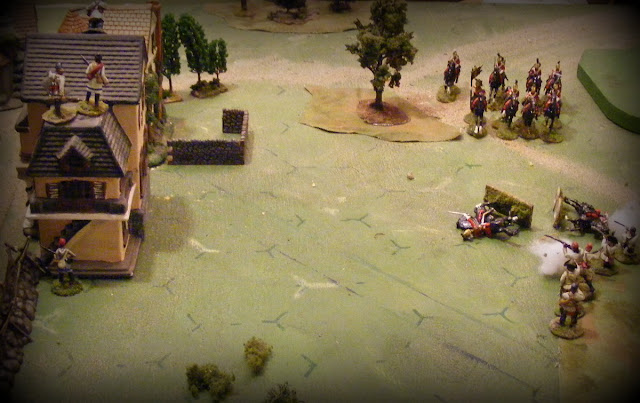 The first rebel assault may have been held, but the battle was not over. As the pikemen were rallied by their leader, mister, now General, George Black, their skirmishers came darting forward, taking over the  houses on the Eastern end of the town. In the distance we could see the Dragoons wheel in column of troops and trot forward towards the rallying pikemen, the famous Flowerdew riding ahead of them, flourishing his sword. Slowly the horror dawned on us, they couldn't see the rebels in the wood !  A sudden volley rang out and Flowerdew was thrown from his horse! The squadron was thrown into disorder and soon trotted back the way it had come leaving bodies strewn on the field behind them. From the wood came a line of skirmishers running for the northen end of the town, while yet more skirmishers filled the fields behind them, hardened woodsmen and hunters rather than farmers by the look of them.  Suddenly from the South came fresh musket fire! 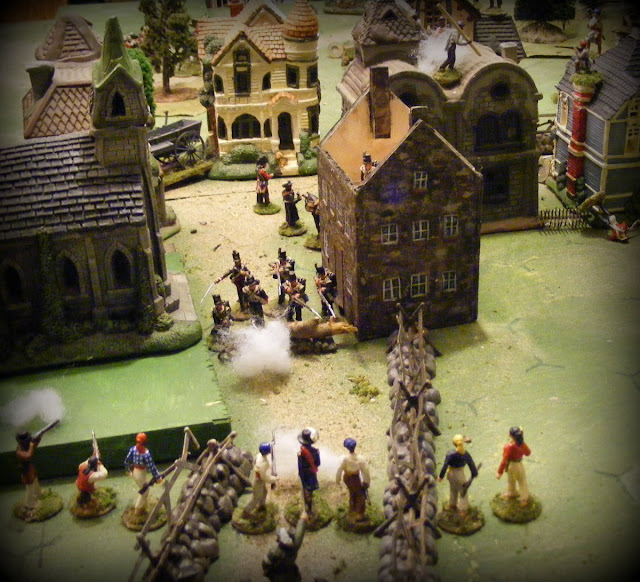 The Southern Column storms the barricades.

It is perhaps typical of how the amateur nature of the rebel forces that the second attack should have only been delivered after the first had been repulsed, or maybe life's dice fell in our favour. In any event, the attack from the south followed much the same course as the one from  the east. Their skirmishers came forward, keeping up a hot fire. Initially, the barricades on the south were manned by a single company of the York Volunteers, the odds were 24 to 4 but the Volunteers stood firm. The first attack was met and thrown back but it had been close and casualties were heavy. 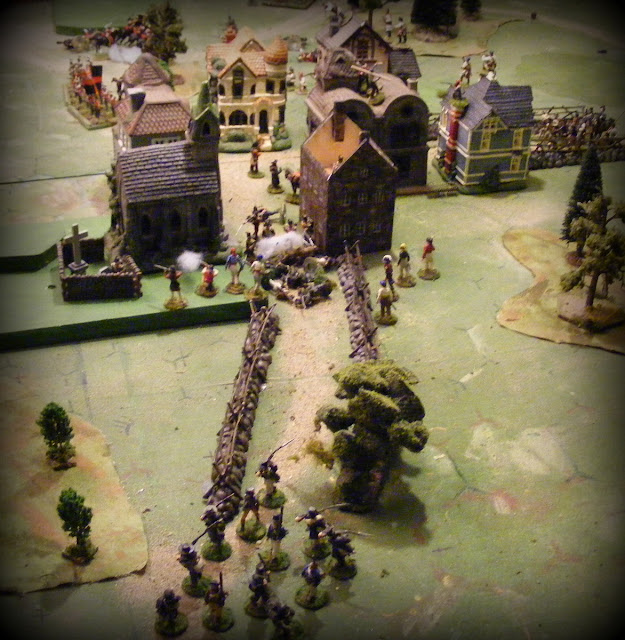 The second repulse of the Southern Column.

Luckily for us,  chance (cards) favour the brave and the rest of the Volunteers had rallied from their earlier defeat, even the wounded returning to the ranks and now rushed to the aid of their comrades, arriving in time to repulse the second Rebel charge. 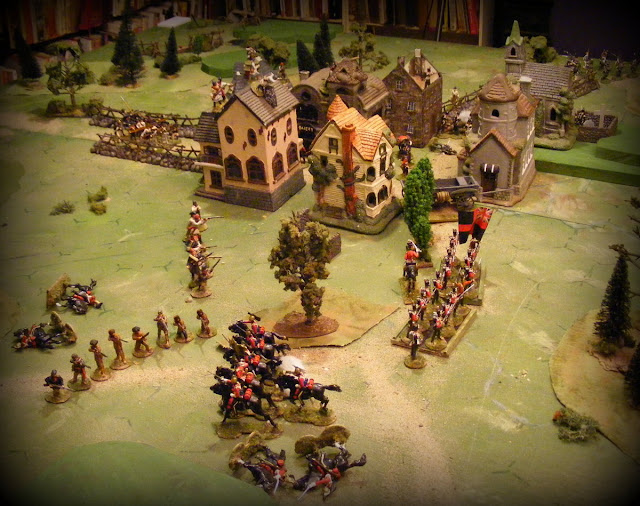 A fierce and accurate fire from the Hunters throws back the Dragoons.

From the north, the steady beat of a drum announced the arrival of the Royal Veterans. Despite their age, these veteran soldiers must have stepped lively to arrive so early in the day. As the Veterans neared the town, the Dragoons rode forward but again  a heavy but accurate fire threw them into confusion and they rallied back to a safe distance to reform.

As the Veterans marched into town, the rebel skirmishers seized the houses on the north side and poured  a hot fire into them. Wheeling sharply into line, the Veterans fired a crashing volley, lowered their bayonets and charged. Fierce hand to hand combat raged in the yards and alleys and at one moment, against all odds, it seemed like the Veterans might have to pull back but their officers urged them on (ed "I'll try sir" chance card) and they fell to their work again and chased the last rebels from the town. In the end, the Veterans could barely muster 1/2 their men but they had retaken the North-Western corner of the town and dispersed the Rebels who had held it.

The rebels had been badly shaken but Victory for them was still possible. Their columns reformed and stormed down the streets but without the numbers and vigour of the earlier assaults and all their attacks were thrown back easily. To the North, as the reformed Dragoons trotted purposefully forward towards the rebel skirmish line, confident that the eerily accurate shooting of the enemy could not be repeated a third time and that the enemy must flee into the woods or be cut down. Behind them a bugle call rang out and a column of Victoria Rifles trotted down the road and into view! How they came there when they had spent the last night at Belmont on the far side of the rebel lines was a mystery to us. They must have marched all night but their arrival turned the tide irrevocably. 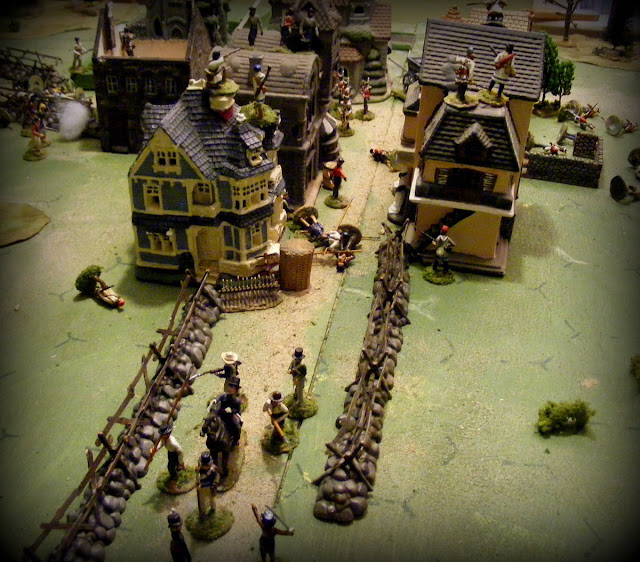 The final defeat of the rebels.

It was the last straw, the masses were dispersed and now the Rebel skirmishers faded back into the woods. In 15 minutes there were only the dead and dying, the broken glass and a wafting smell of smoke to show that they had ever been here.