Quite apart from several hours cleaning up and converting 8 castings into rebel pikemen, I managed to find out a bit about the Blue River Valley Rebellion  of 1842. 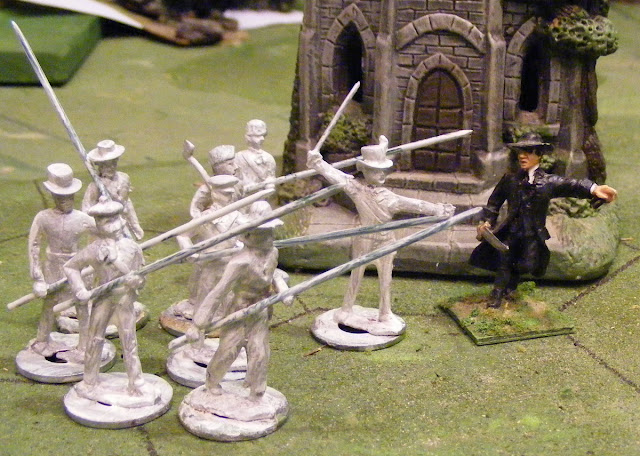 Father Michael leading a ghostly horde of rebels in defence of their rights.


The Blue River Valley can be located by finding the triangular Sloy Lake which is nearly in the middle of the map, north of the word "Faraway". The river runs from the Western tip of the lake  to a junction with the Grand River not long before it empties into the ocean at Newport. Brooklyn and Belmont are the two major towns in the valley but there are various small hamlets scattered about.

The valley lies north of the traditional Kingdom of Faraway but ownership was included  in the original charter of the Faraway Trading Company.as were rights over Skraelingland and the Origawn Territory. It should perhaps be noted that the inhabitants of these areas were not consulted at the time. The valley was useful for access to the interior and also became the defacto border between the Wapti, the inhabitants of Skraelingland and Faraway. Since the company was interested primarily in fur, hides and minerals, the area was left pretty much to itself apart from a few company posts each with its small community of farmers and traders. Many of the FTC employees and supporting farmers were Scottish immigrants but others were descendants of a long abandoned French interest in Atlantica. As the Origawn Territory began to be opened up, an increasing number of settlers from Oberhilse  began to cross the Lake and settle in the Valley rather than pushing farther into the wilderness. 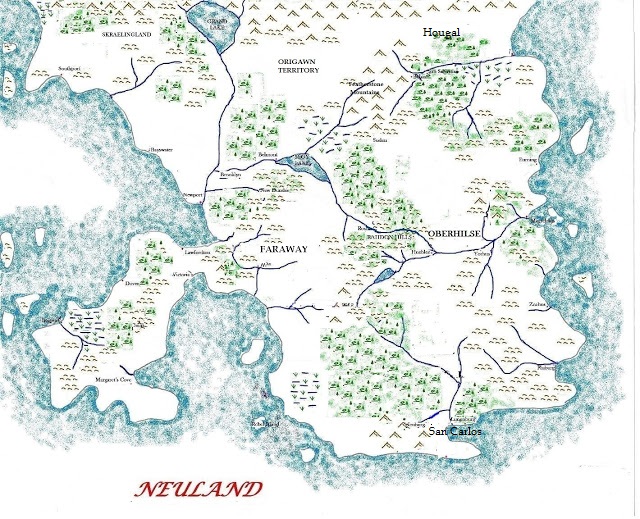 The trouble began when Faraway itself took formal possession of the Blue River Valley. Teams were dispatched  to survey the Valley and inhabitants were asked about the title to their lands. Since the FTC had paid little heed to the settlers, most had no papers granting title to the land they had farmed, sometimes for generations. The Queen proclaimed that rights would be observed and that there would be no mass expulsion but trust was low and soon meetings of alarmed settlers were being held in Churches and taverns up and down the valley.

On the edge of the Great Forest, north of Belmont, is the little community of Bois Verte. Soon after the surveying began, Father Michael, the parish priest, went on one of his accustomed walks through the forest. Caught in a sudden thunderstorm, the worst ever seen in that region, he disappeared for three days. When he returned, with a wild glare to his eyes, he announced that he had been visited by an Angel. and commanded to protect his parishioners from the rapacious stealers of land.  Each Sunday thereafter and on every other occasion he could find, he preached the duty of his flock to resist tyranny. Matters came to a head when the survey teams came to the door of the parish church in Bois Verte. They were met at the door by Father Michael and sent packing with cries of money changers and defilers of the House of the Lord. As a crowd gathered, things  turned ugly as the surveyors' equipment was seized and smashed and their books burned. The survey party was lucky to  escape with their lives. Up and down the valley, armed men began to gather and blacksmiths began to beat out pikes for those without muskets. A congress of communities was summoned and John Watt, a  radical and newspaper publisher was elected as interim President.

Outrage was the reaction in the capital and in short order an expedition was dispatched to arrest the ringleaders and seize stores of powder and ball.