One of the things I enjoy about Charge! is the way the simultaneous moves using written intentions introduces player vs player rather than player vs dice friction. There are all sorts of  ways around this when playing solo but none of them exactly reproduce that mental challenge of trying to guess what the enemy will do.

Some people just work out the best options, some dice for initiative and then just do each side in turn, like I do for HofT games, others play one side and program the "enemy" or dice for what each unit of the enemy will do, and I'm sure there are lots of other options.

Here is the situation at the start of turn 3. The defenders, underestimating the speed of the enemy advance  have left a gun forward without adequate support. (To be fair to them,  I planned to use 2/3rd distances but changed my mind on turn 2). 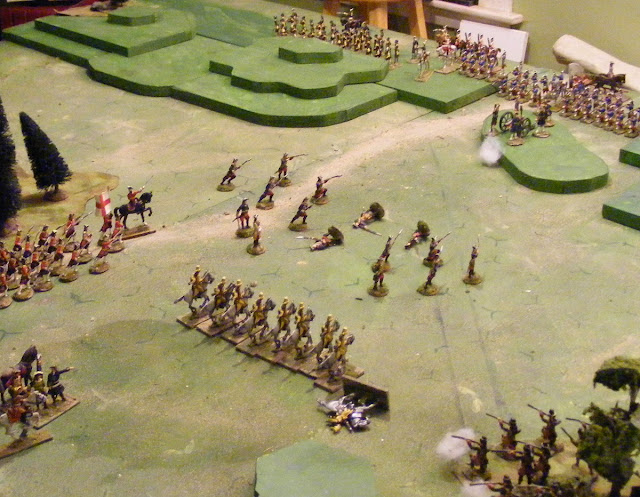 Up to this point. I had been dicing to see who would go first each turn with each side declaring charges before either moved. But here we see a typical dilemma. The Gun is about 14" from the closest skirmishers of MacDuff's  light company. These are close enough to be able to move 8 infantry to within close range of the gun and declare that they are firing, thus silencing the gun, or they could charge the gun. Behind the skirmishers is a squadron of Hussars which is close enough to charge through the light infantry into the gun. Neither enemy is close enough to pin the gun so it could choose to withdraw but a bold player might leave it in place and move up supports. To complicate things, if the Hussars charge but the gun retreats they will be at risk of being shot up either by infantry in front of them or from the light infantry that ambushed them from the wood last turn.

I was originally planning to dice for initiative and make alternate moves but it just lacked something. When I play Charge! against Lentulus. he seems much better at predicting what I will do than vice versa and with fairly open terrain and a force 1/2 the size of the attacker, this scenario seems slanted against the defence, so, I decided to make the attacker declare his intentions first, then I will decide on the best and 2nd best option for the defender, weight them and roll to choose. In this case the Hussars moved to the other flank, the light infantry came forward to silences the gun but it manhandled back 6" with an even chance to fire while the defending infantry moved forward and fired.

But I'm getting ahead of myself. The next post will cover the set up, forces and opening moves.
Posted by Ross Mac rmacfa@gmail.com