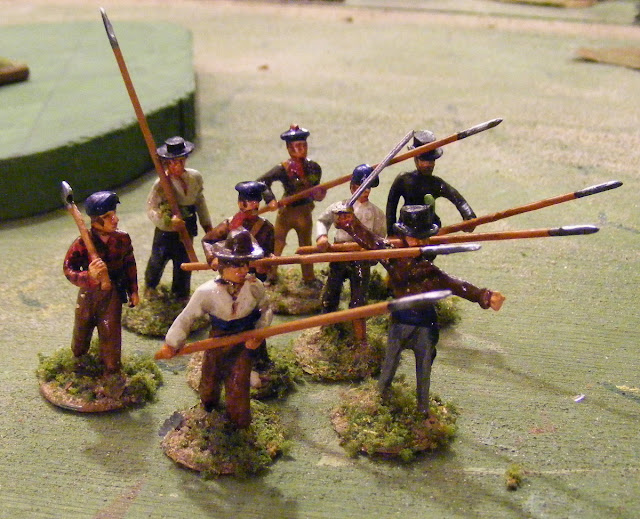 "When last this narrow street he trod, his shining pike in hand
Behind him marched, in grim array, an earnest stalwart band."
(My new rebel pikemen, all conversions of original figures, 2 officers, 3 pirates, 3 infantrymen.)

Here they are, brave lads, ready for the fray. Today's game was good but there was a familiar look to it of the "We've been here before" sort. The small, smooth green bases were a new experiment but of course the terrained washers and 8 man units aren't and MacDuff never seems to stay dead and buried for long.  Ah well, how would you know if something else worked unless you tried it? I
believe the verdict is in: MacDuff for 1812/Atlantica.

Actually while I sometimes feel like its been ages since MacDuff was dropped, a quick look over the last 4 years shows some 16 or so games of macDuff. Here's just a few of them.

.
In other news, the Noodle's illustrators are beavering away as we speak and a special edition covering the outbreak of armed rebellion should be out by tomorrow.