Imagineering can be hard work

There is an attraction to inventing history but there are times when it would be convenient if I had access to a Complete History of Rosmark. Unfortunately I haven't written it yet.

I was quite happy with the ideas that came to me yesterday and while they were on the right track wargaming wise, something didn't feel quite right imagi-histroically, so I went back and checked what records there are. I'm now starting to wonder if I have been subjected to misinformation if not propaganda as regards the support shown by the military to the Queen.

The last engagement between the two parties was the Siege of St. Lambert. During that battle, of the 10 Regular Infantry companies, 7 fought for the King including the Irish. Only 3 fought for the Queen, 3/10 being hardly what one could call  a strong majority. In fact, when we look closer,  nearly 1/2 her forces were composed of volunteers and local militia. So who is this Queen and if she is foreign where exactly is she from and who is fighting for her and why?  (An atlas of NQSYW Geography would be nice.) 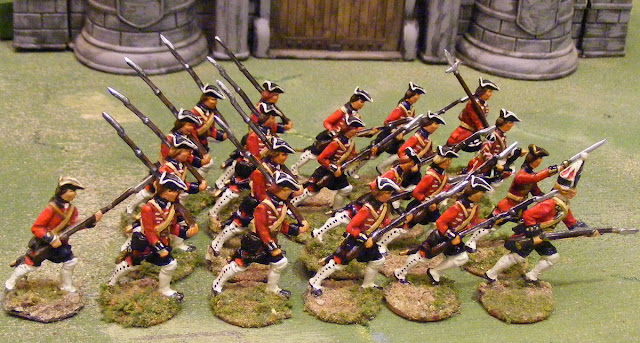 The Second Company of the newly promoted Royal Irish Regiment. In front may be seen the sample Grenadier from last year, behind is a member of the original Irish Company. The rest of the first company will be getting new lace, belts and buttons added this weekend.

I noticed that the Queen is now being referred to as Dowager Queen rather  than Queen Regent. Presumably part of the Treaty of St. Lambert involved recognizing King Michael's right to the throne? So what else is there to fight about? Well the use of Dowager, implies property rights, and in the circumstance of a foreign bride, strongly suggests a Dowry. Ahhhh, now it becomes more clear. I think I was beginning to think of her as a Catherine, fighting to keep the throne of a foreign land but I suspect it is a case where St. Lambert and the surrounding coastal provinces along The River (so much we don't yet know, like the name of the river) were included as part of her dowry when she married old King Kohl, Michael's father by his first wife who died giving birth. The question then was of the terms of the Dowry and of the King's will. Are the Dowry lands a permanent part of Rosmark? or did they revert to independent status on the death of the old King?  While the lawyers argue, it seems that the question has been submitted for resolution by combat.

So how are the forces really arrayed?

4 guns
1 platoon of Sappers and Miners.

Queen's Army
(a little make shift and temporary at this point)

Neither of these lists are sufficient or permanent  but they will get me going and by mixing in some fully round AWI figures, will enable me to fight some 'at home'  battles sooner rather than later. .
Posted by Ross Mac rmacfa@gmail.com

Email ThisBlogThis!Share to TwitterShare to FacebookShare to Pinterest
Labels: Rosmark