One of the awkward bits of devising your own rules and deciding to use standard units is deciding what, exactly, those standard units should be. There is no particular reason why units should be standard, a quick look at any detailed order of battle will show that it is unusual but there is a certain nostalgic attraction and it does make it easier to balance scenarios and once decided on, easier to collect units. There are a couple of constraints that I have settled on up front. The first is that I want to be able to play scenarios out Grant's "Scenarios for Wargames"   right out of the book, no fussing with figuring out equivalent forces. The second is that the largest scenarios need to be able to fit on my table. 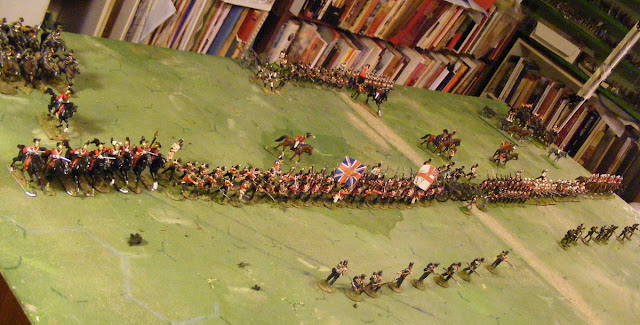 A full "Wargames Scenarios" "army" with no room to spare.
A mix of the 2 final OB presented below.

I like the idea of having battalions subdivided into companies, 4 x 8 being a nice size that can be divided in 1/2. When I was playing  Hearts of Tin with units composed of 5x4 man stands, that also worked well, as did my old MacDuff organization of 4 x 8 man companies. The problem is that with 40mm figures,  8x32 figure battalions won't fit on my 5x6 table, even without cavalry and guns.  I considered 4 such battalions, fielding 1 for every 2 units but that means only 4 choices of uniform and I still want to add Guards and Highlanders. So, no good.

Having separate companies also implies having Colonels to control the regiment as well as Brigadiers. In the past this multiplicity of levels of units has caused some confusion and the old issues arise around scale and number and frontage of the individual companies. Therefore I decided to stick with the battalion as unit, ignoring companies. If needed detachments can be made or 1/2 units fielded. Since the scenarios almost never call for a force of less than 1/2 a unit. Any unit size that can be broken in 1/2 will actually work. 24 man battalions seemed to fit the bill with a theoretical organization of 6x4 man companies. However, while a full army can be shoe horned onto the table, the units will  be stacked up from side to side, several units deep with no room to maneuver. 12 figure 40mm cavalry units in particular need a great deal of table space. 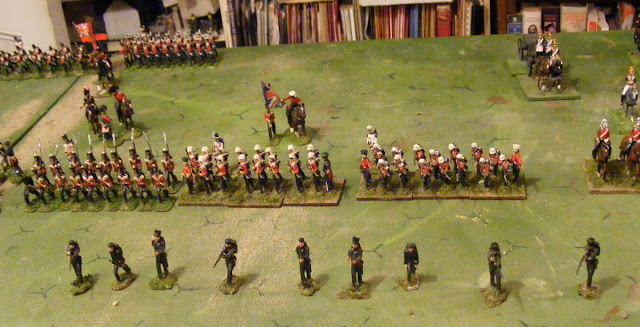 A Charge! Brigade (Regiment) mounted on a 15mm per figure frontage. About 24" wide.

Since I like Charge!, copying the Charge! organization but calling each "company" a battalion and each "regiment" a brigade is an attractive option.  For those not familiar with Charge!, the standard company organization is an officer, sergeant, drummer and 16 privates. Three such units with a small command group form a  regiment. Light infantry are the same but with only 12 privates and 2 companies. Cavalry  have an officer and 8 troopers meeting the 1/2 size criteria and providing a suitable model for light units. Since I fire by 4 man groups and normally include officers and nco's 18 and 9 are awkward numbers but workable. Fielding 1/2 a cavalry or light infantry unit would be also be awkward.

Most of my 1812 figures are mounted on washers that are a little over  22mm wide, adding over 2" of frontage to each unit. The plan has been to re-base all infantry on a 15mm frontage but outside events have drained the war chest  and having deployed the troops on the heavy washers again, I am reminded of how stable they are. The thin 15mm bases have passed all my stability tests so far but they still feel less solid. Something else to think about.

There is no real need to use the standard Charge! organization, after all the rules don't depend on it and state that they are only an example. My second thought was to translate my old 5x4  organization from Hearts of Tin. I have a fondness for 20 man units, just big enough and they fit. However, when using groups of 4, 10 figure light infantry  units and 1/2 strength 20 man units are slightly awkward.  I also have several 9 figure cavalry  and 8 figure light infantry units that would need to have 1 or 2 figures added.  The interesting thing is that the 16 strong washer based units look OK and take up about the right frontage for an average War of 1812 battalion since these were chronically under strength, while the 15mm frontage battalions look too small.

One last complication, I recently rearranged my room and removed a wide desk. The current 5 ft width is occasionally limiting when planning a game but makes movement around the room much more comfortable so it is here to stay. I now have extra, under used space on the end though so I am considering doing the work to add a foot or two to the table. (Looking at shots of games on the 6x8 while checking past org thoughts on old blog posts didn't help!)

My current thoughts are leaning towards the 16 and 8 strong units, to maximize room to maneuver, match the scenario format and take advantage of existing units thus allowing me to paint new units rather than spending yet more time refurbishing old units. However, the emotional appeal of the Charge! units has not yet been finally dismissed.