In the old Rosmark army, there were two crack infantry units, MacDuff's Fusiliers, especially the Grenadier Company and the St. Lambert Volunteer Light Infantry. At Not Quite Lobositz, where Rosmark units first found themselves on opposite sides of the table, it was MacDuff 's that was given the task of driving the Volunteers from the Lobasch Hill and drive they did, inch by stubborn inch. It is perhaps interesting that  while even the Queen's Regiment rallied to the defence of the realm against the Raid on St. Michel, the Volunteers took no part in that campaign or in the retaliatory strike against Adelheim. Now MacDuff's and the Volunteers were pitted against each other again. 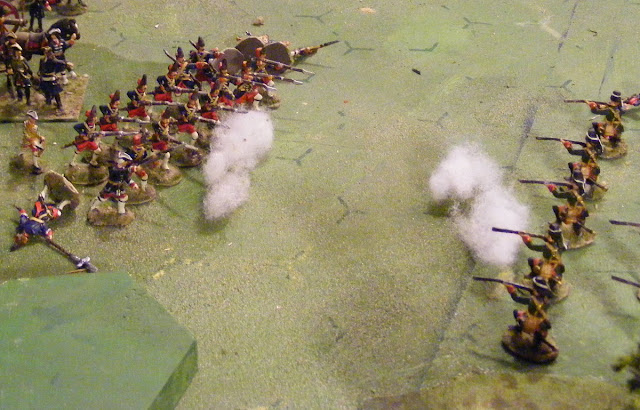 The Grenadiers were eager to go at the foe with the bayonet but their officers knew that the veteran light infantry was unlikely to be caught and so they relied on the iron discipline of the Grenadiers. Step by step they drove back the light infantry while platoon volleys rippled up and down the line. Fire and advance, reload, fire and advance, reload. The sergeants pushed the rear ranks forwards and closed the files as the 'pop pop' of aimed fire from the skirmishers took its toll. At last, the Volunteers couldn't take anymore  and their short dashes to the rear became a race for safety.   Wheeling left, the Grenadiers marched in support of the Pandours attack upon the Pensioners, the last barrier on this flank. 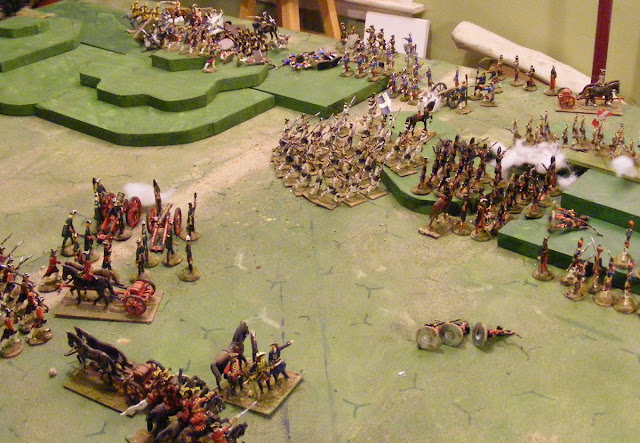 After the brief lull, the battle was renewed with vigour. On the plain, the Rosish artillery had been shifting position constantly, occasionally getting off a quick round before the enemy  pulled back behind the crest or friendly troops blocked the line of fire. At last they manhandled forward to get clear of the King's Brigade, just as a clear line of fire opened to the Queen's Regiment. Was the gap wide enough? It was, by the narrowest margin though some suspect that the gunners didn't really care if they bowled over a few white coats on the way. Could they get the guns into action quickly enough? Evens to move and fire, no problem for these well trained crews (the Queen's gunners failed to manage a fire and move all game), long canister range, 2's to hit, no problem, roll for effect, 2 dice, 8 hits. The Queen's Regiment, already pounded by the light infantry, the Irish and some earlier roundshot, had had enough. The pass was close at hand and they fell back through it (below 1/2 strength).

MacDuff's, now recovered from the tremendous volley that had hit them as they crested the hill, rushed down hill with the bayonet. Beyond them, the Yellow Hussars spurred forward in support but were met by General Darnly at the head of his 1/2 squadron of Carabiniers. A sure sign of desperate times when  a General draws sword in this age. The Hussars knew they were outmatched  by the weight of the Carabiniers but with the sharp sabres they cut down the General and his Kettle drummer and held the heavy cavalry. An audible sigh of relief went through the ranks of the militia, whether it was because the Hussars were held or that they were now free of the General's meddling has been a matter of debate in the taverns of St. Lambert.

(Aside: During my Middle School Period of wargaming, I was put off by the lack of any role for Generals in Charge! despite the presence of these being laid out. An interesting omission considering that the rules were written by senior officers with combat experience who were also historians and teachers at Military College.  Much later, after much learning, I can extrapolate that the authors intended for the player to BE the general and that, like with morale, he should not hide behind the failings of the little plastic or metal figures on the table. Also, that while individual subordinate officers are important, modern armies, and I include the 18thC here, had structure and that no one man is irreplaceable. If a Brigadier falls, the Brigade may be momentarily affected but it does not stop functioning, the machine carries on. Given that turns average out to about 1/2 hour, it is below the grain and swept with many other things into dice that help decide whether an attack succeeds and fails, It is design for effect.) 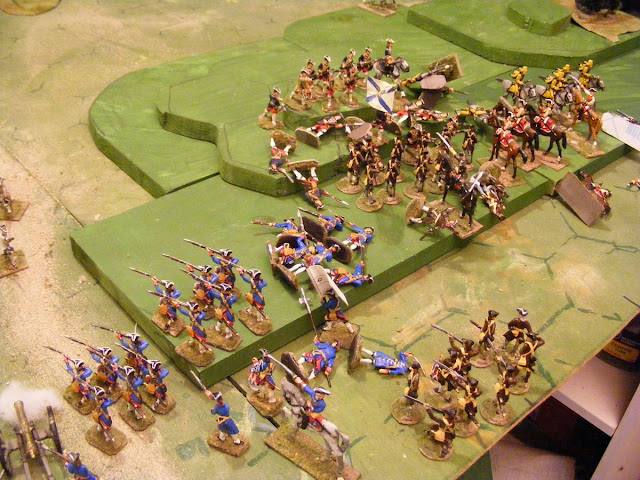 All that remained was for the Fusiliers to sweep away this one company of militia and the road would be open with time to make it through the pass by night fall. The Fusiliers had stormed breaches and batteries, and had captured cannons and colours from the veteran soldiers of the Pragmatic Coalition. It was a sure thing, a done deal, despite the heavy losses and steep climb, or was it? As the Fusiliers slipped and slid down the hill, all order lost, the Brown coat militia stood and fired like madmen, the flashes of their muskets close enough to burn the coats of the Fusiliers who could make no effective reply. Suddenly, like the turn of the tide, the flood of Blue clad soldiers, slowed, stopped and then suddenly retreated. Silence descended, such a thing was unknown! MacDuff's Fusiliers  were repulsed! Later Colonel Brown was heard describing the sturdy burghers, merchants and tradesmen of his militia as being "as sturdy as their Brownstone Houses" and so the proud militia adopted a new name, "The Brownstone Brigade". 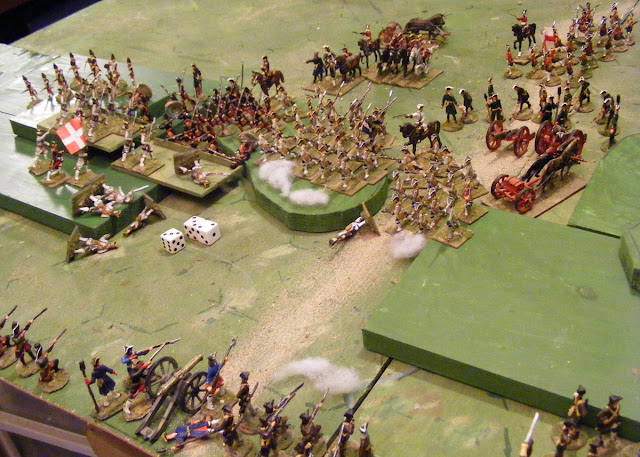 The Pandours storm the heights while the King's Brigade creeps onto the ridge.

All hope was lost of capturing the South Ridge before dark but the center appeared open and to the North, the Pandours were pressing the Pensioners. Keeping the new tactics in mind, the Pandours pressed forward at full speed, not stopping to fire. The old veterans stood steady in the ranks but they must have been aware of the gap on their right and the stream of wounded and stragglers heading toward the pass. As the Pandours approached to 3" they unleashed a ragged volley. Moments later the wild Pandours charged with savage cries. For a moment the Pensioners held, then those who could, broke and ran for the pass. The Ridge was captured and the way was open. While the Pandours reformed and looted their prisoners and the bodies of the slain, the Grenadiers rushed past them to seal the victory.

By now certainly the King's Brigade would have swept away the handful of infantry and gunners struggling to keep a gun in action, blocking the road. Surely? But where were they? Still parked in the pass, feebly file firing at long range with little effect. Colonel Arnold, their commander, later claimed  that the single contour hill had slowed him down too much and that in the gathering dusk, he had thought he was in close range but unable to reach the guns with a charge. Less kind voices muttered that the White coats who had served Queen at Not Quite Lobositz, alongside the St. Lambert Volunteers, the Queen's Brigade and the Pensioners who had been part of their Brigade then but now stood on the hill above them, had been unwilling to face the canister and reluctant to inflict damage on their former friends.  Moreover, it is noticed that despite several turns in cannister range, the Brigade emerged from the battle almost unscathed  and it is being suggested that Colonel Arnold intends to join the Queen and take the Brigade with him. 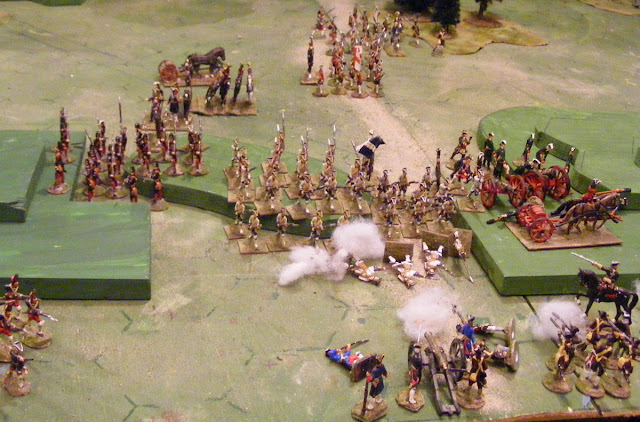 Night falls on the pass.

So as the sun set behind the mountains and darkness rapidly descended. The King's army made a camp on the hills they had stormed. The King ordered the bells rung to celebrate the victory in which his men had stormed and captured the ridge but it did not go unnoticed that while there was a somber mood in the King's camp, there was a jubilant  mood in the Queen's camp as new recruits flooded in. Patriots and loyal subjects had met the best of professional soldiers in battle and had held them all day.

(The victory conditions are just a bit vague if not contradictory. By the strictest of reading the Queen's troops had to still be holding the ridge on the last turn so technically the game was a marginal Pyrrhic victory for the King due primarily to getting 11 turns instead of 9 but on the other hand, the Queen's troops still blocked the road and none of the King's troops had actually exited despite the extra turns and they had suffered staggering losses and disorganization. I leave it to the historians to judge).