How easy it is sometimes to over look what is right under your nose! I even thought 3/4 of the required thoughts last week but failed to make the right connections. But let me go back and explain.

My primary goal in expanding my collection of 18thC Prince August figures is to enable me to easily fight Charge! battles here at home while still maintaining and improving my contribution to the HAWKS shared Not Quite The Seven Years War project. In particular I want to be able to field easily recognizable regiments giving me morale units larger than 19 figures while adding the minimum number of new figures and "wasting" as few as possible of the existing ones, all while maintaining and building on an existing storyline and finding something different to paint.

The most straight forward approach seemed to be to just double my forces but then I either needed a substantially larger table, or a slightly larger table plus some radical basing changes which would have to be made compatible with the rest of the group's basing once a year.  A simpler approach urged itself of a minimal increase with the acceptance of games larger than now possible but smaller than envisaged. This stripped away some of the interesting uniform options but at least meant not too much boring repetition of similar uniforms.

There was another issue that I put aside. While it is sometimes easier to have symmetrical games, I like balanced but  asymmetrical ones,  especially when playing solo. This, apart from raggedy soldiers and striped trousers, is the main attraction of wargaming the French Revolution at a tactical level. Now for those who are not familiar with Charge!, it states that it was written for the latter part of the 18thC and elsewhere the authors admit that it is more Napoleonic than Frederician despite the use of primarily mid-18th Century toy soldiers. (The figures used do include Napoleonic artillery and Russian  Grenadier figures.)  Hence the prominent inclusion of skirmishers, column attacks and infantry squares. 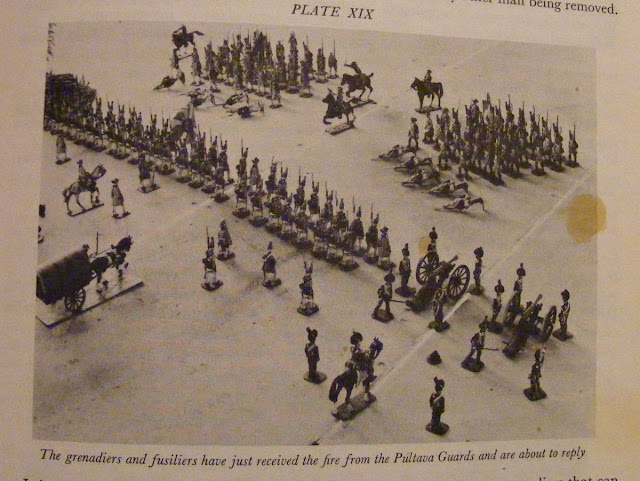 An illustration from Charge! by Lawford & Young showing a column attack on a line.

Now I may do it in the heat of battle, but I have  a hard time planning to use my 1750's French units in column assaults screened by skirmishers so I was pondering an inclusion of some late 18thC figures in my larger expansion. At one point I also considered converting figures to Turks and allowing them to use such unorthodox tactics. While planning this expansion, I decided that a King, faced with a civil war in which most of the regular, largely mercenary, army supported the other side, might call upon the population and there was already some indication that some of  these resembled Croats and Pandours so I decided to raise some conventional line infantry dressed in the national style as the early Hungarian regiments were.  While answering a comment from Rob, it suddenly occurred to me that such hastily raised forces might not be well enough trained for linear warfare regardless of their patriotic enthusiasm. Some might well be accustomed to arms and border warfare and be capable light infantry but the rest might be no better than militia. Now in Charge! there are only two downsides to militia, they don't shoot as well as line troops and their units are smaller and thus more fragile. They fight just as well in melee and are thus ripe for being formed in columns and massed behind skirmishers until the time is ripe for a charge. Voila! There are some fresh  units for me in different uniforms and with different tactics, something to add spice to games.

But how to balance the games? I'm not a big fan of point systems, partly because when used with army lists for historical forces they so often lead to weird a-historical wargame armies and partly because in most systems, some troops are more worth their points than others. (In other words, all 1,000 point armies are equal but some are more equal than others.) There is no denying that points can be useful for games where organization or troop types and qualities vary though. Looking at the Charge!, in the Notes section, which I rarely consult, there is a point system based on the standard units which are recommend. These are 3 squadrons/companies of cavalry or infantry but 2 guns or companies of light infantry or militia. Dividing the totals by the number of companies gives us a rough company value which can the be rounded to get a unit value which we can then slot over to the Grant Teasers.

In scenarios such as Sawmill Village, a list of troops is offered for players to choose from with all units being equal. This is a bit different from the very first teaser where values are given for The Wargame units but it has worked for me. Since the Charge! points work out to 70 pts for a cavalry squadron of any kind, a gun, or a company of grenadiers of light infantry, we can call this "1 unit". A militia regiment is 65 pts for 32 figures, close enough to also be 1 unit, while line companies are 50 pts each, close enough to say 1 1/2 line infantry = 1 unit.This could be applied to the entire force for a side, for example Red has 7 units and can pick what they like, or it can be applied by arm so 2 cavalry, 4 infantry 1 gun and then the infantry portion broken down between line, grenadier and militia as desired. The companies can then be grouped into regiments as appropriate.

Here is a workable solution for me! One that will generate some excitement to paint as well as some games. 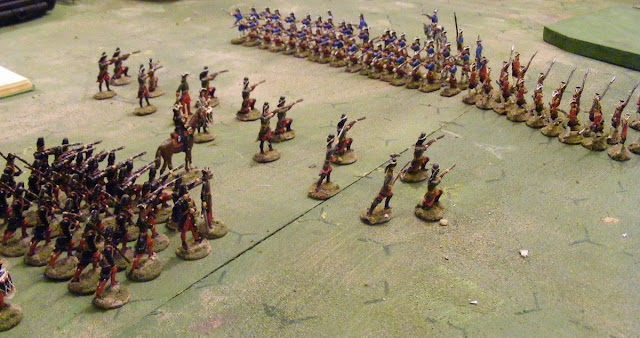 The Volunteers of St. Lambert screening an assault by the Crown Prince Pandours on the Dowager-Queen's foreign infantry. (70+65 pts vs 150 pts in Charge! terms or 1 infantry + 1 lt infantry vs 2 infantry in scenario terms)

Since the truce with the Dowager Queen appears to be about to break down,  King Michael has put out the call and the burghers, mountain clans and peasants have flocked to his call and are being armed and organized to support the always loyal MacDuff's against the Dowager's forces. I expect the first encounter on Saturday!
Posted by Ross Mac rmacfa@gmail.com