Well this time I did!  I'm hoping that old joke (zulus//d'you lose?) originated on Vaudeville so that I won't be forced to admit to being sufficiently familiar with the Monkees to be able to quote from "I'm going to buy me a dog". If not then let me point out that the records and portable record player belonged to my older sister. 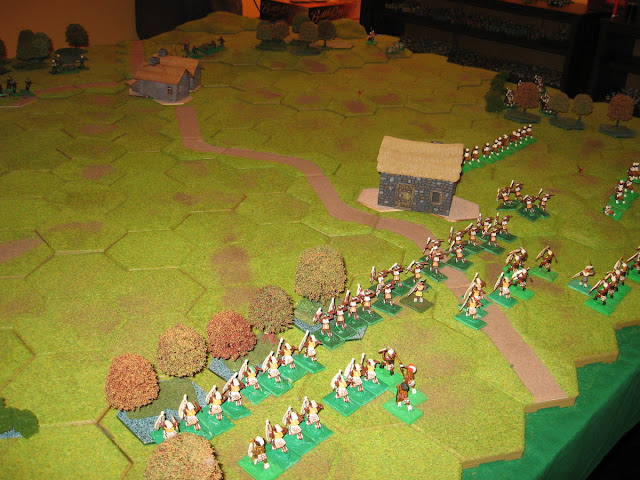 Ron's Zulus massed at the start of the game, before they started scouting and probing. There are a few redcoats hidden the buildings on my side of the table.

Once again the game was at Ron's with his figures and terrain. The secnario was Number 2 from Scenarios for Wargames and the rules were Battlecry. The only modification was that the Zulus could move 2 and not battle or move 1 and battle. They had 4 dice if adjacent only and got 2 units for each scenario unit. A discussion of a limited shooting capabilities for the Zulus with implications for play balance is under way. The British got 1 unit per scenario unit or gun.

The effect of the large multi-tiered hills was a matter of debate for about 2/3 of the game before we settled on a reasonable compromise between rules and reason/looks. Played hell with the lines of fire of the Royal Artillery everytime it changed. The final solution was that we treated hill top hexes as hill hexes in the rules. Single height slope hexes are  not hills, double high or steep slope hexes are a movement obstacle but are not hill hexes. This means artillery on a hill can fire out over a slope hex with the additional range but not over other hill hexes, presumably these providing. some form of uneven or rough ground and a convex slope to justify their 1 die penalty and blockage of LOS. We did try other options but they were either too complicated tracking when a hex was one thing and when it wasn't or else they messed with the other rules too much.  To get good lines of fire from a high hill, the ground will have to be laid out with contiguous rows of slope tiles. 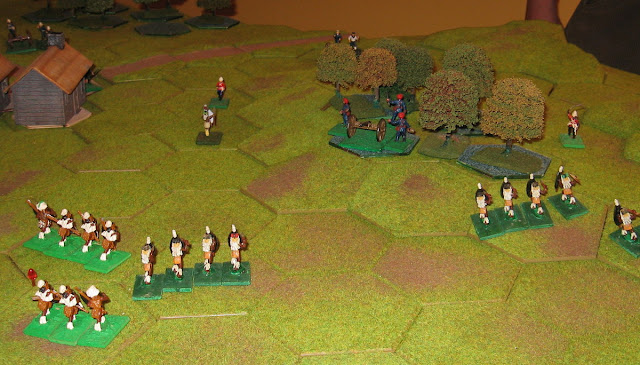 The view on the Zulu right near the end of the game. Unseen are the dead horses on the slope or the scatter od red coated corpses.

My plan was fairly simple. I had 4 infantry companies, 2 guns and a cavalry squadron. I deployed 1 infantry to hold the fortified hilltop farm on my right, one in the village in my center and 1 on my right. The guns were deployed in the center for fire support backed by my cavalry with myself at their head. I was determined to hold my ground, not getting sucked in to an advance, and to scream for help at the first opportunity. Luckily I got a reinforcement card early on and got a 3rd battery.

The not getting sucked in bit lasted for several turns as the Zulu horns poked and scouted and prodded and tested my lines. Then I got a little impatient with the lack of range and/or LOS on my guns and determined to move them forward. Then I started to worry that by the time they got where they were going, it would be too late so I made poor use of a bombard card to bring my guns forward in hope of getting a shot off. Then I suddenly stopped drawing useful cards. Oops. Eventually I made a second error by allowing my hand to coax me into some foolish moves in hope of getting lucky. I moved the guns again to a position where they could fire from a safe distance the next time I had a card that allowed them to shoot that is, since I no longer had any, and backed them up with my cavalry  for whom I had all sorts of cards. Inevitably 2 things happened, I proceeded to draw card after card that I couln't use and Ron started using the Forced March and Assault cards that he had been hording to overwhelm the units that I had pushed forward.

The field erupted with Zulus who overwhelmed the farm, caught my cavalry, then slaughtered my General.  My gun which never fired a shot all game was saved by my use of an out of ammo card which sent it back to my board edge just as it was surrounded but I could only afford to lose 1 more unit. I finally managed some  pay back but it didn't take long to overwhelm my last overextended  unit. 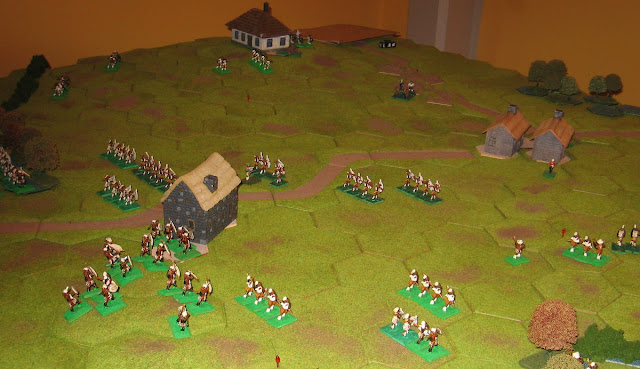 There will be Gentlemen disturbed by their morning papers.

More Colonials in 2 weeks I hope but meantime I have 19 fresh Prince August castings on my desk, cleaned and based, ready for priming and I have just been reminded that the Hungarian line infantry did not adopt the tricorne until 1749. Hmmmm.
Posted by Ross Mac rmacfa@gmail.com