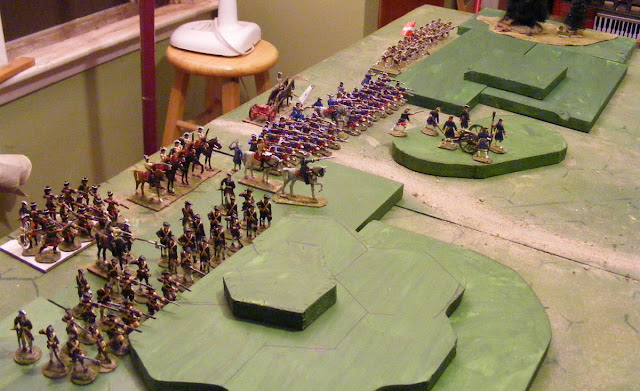 The Dowager-Queen's Army waits. The Light Infantry on the tray at the back of the table aren't really there. They are secretly lurking in a wood elsewhere on table. Shhhhhh..

Scenario 1 from Wargames for All Ages by Stuart Asquith and Charles Grant. When push came to shove, despite rumors, the old King's & Royal Companies remained loyal so the Queen's army consists of: The Queen's Germans, Capt. Picard's Company of Pensioners, The St. Lambert Militia, the St. Lambert Volunteers Light Infantry and a gun of the Foot Artillery.  Having noticed once again that Army Commanders are allowed a cavalry escort, half a squadron of Carabiniers has been assigned to General Bothwell until a permanent escort is raised.
Posted by Ross Mac rmacfa@gmail.com