There Wasn't Nigh As Many As There Was a While Ago

Today General Turner caught up with Brigadier Zinn again at Union Corner. Both armies were looking a little ragged despite the return to the ranks of many stragglers and lightly wounded men from Sunday's action. Initially Faraway held a substantial advantage in cavalry but as the various Oberhilse units straggled onto the field this quickly changed to parity. As usual, Oberhilse had started the campaign with an advantage in line infantry. This had been briefly lost due to heavy losses in the first engagement but heavy Faraway losses in both previous actions coupled with the arrival of units which had missed the second battle meant that Faraway had to attack without any advantage in line infantry. The Oberhilse artillery had been whittled down and Faraway now had a slight edge but it was as always, in light infantry that the Queen's army held a major advantage: six companies to one. 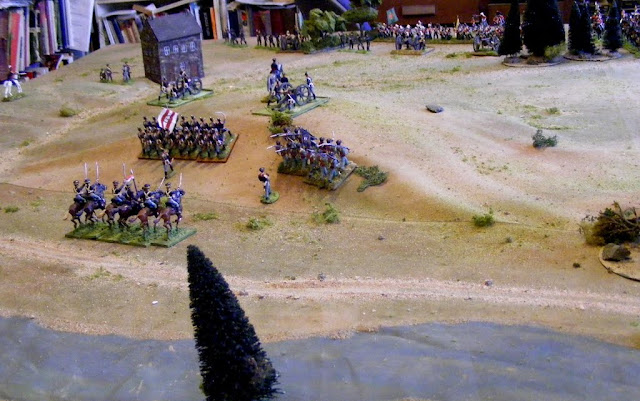 Brigadier Zinn's plan was simple and played to his strengths. Using the reverse slope to shield his infantry, the mainstay of his defence, he deployed his 2 batteries forward to dispute the advance of the enemy and put his lone Dragoon regiment in reserve.

General Turner's plan was also straight forward, use his artillery and skirmishers to pin and wear down the enemy artillery and light troops while attacking quickly around one flank before enemy reinforcements could arrive.

At first General Turner's plan appeared to be working. A company of Bangor rifles had slipped into the village just forward of the hill line but was hit hard by the Victoria Rifles. The Rifles also screened one battery and started knocking down crew despite being raked by canister while the 2nd Oberhilse battery was hit hard by the Queen's artillery and forced to retreat or risk swift destruction. But as the cavalry negotiated a defile between woods and began to deploy for their attack, they were suddenly charged by the Blue 2nd Dragoons who had galloped forward from reserve to meet them and then seized the moment. 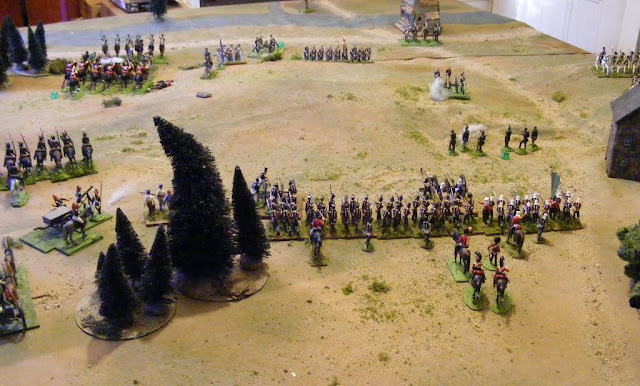 The Queen's troops advance as one Republican battery is forced to withdraw to avoid destruction.

The Blue Dragoons however, like several units on this day, seemed to have been worn down by 4 days of marching and fighting. A disciplined counter charge by Larsen's Lancers sent them reeling back to rally behind the Frontier Light Horse who had just galloped onto the field, just in time to deploy in support. Moments later, two squadrons of the Blue First Dragoons trotted over the bridge and deployed on the Blue left flank. This freed up the Lafayette Country Rifles and Brigadier Zinn sent them forward to rescue the Bangor Rifles and turn the enemy flank. 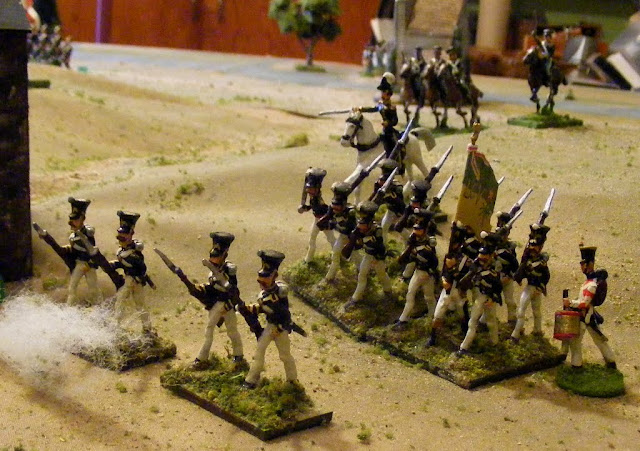 Newbies no more, these Volunteers are already in their 3rd battle!
To deal with this new threat, Turner was forced to divert the Wye Fusiliers from the attack in the center. Determined to regain the initiative, he then ordered the cavalry to press the attack. It seems that the Princess Charlotte Dragoons were also suffering from the strain of continuous action and Brigadier Steele had to ride over and lead them forward personally. (ed. The 4 opposing cavalry regiments on this flank managed to roll something like 8 1's out of 12 dice for Order checks over the course of the next 3 turns! Not to mention a 1 for Steele in the charge.) If the charge succeeded, the  Red dragoons could pursue into the still rallying  Blue dragoons and probably sweep away all resistance on that flank. The Light Horse, faced with the approach of the heavy Red dragoons on their big Blacks, calmly pulled their rifles from their holsters and at the last moment poured a heavy fire into the enemy, breaking the force of their impact. A prolonged melee resulted pistol and rifle butt against swords but it was the loss of Brigadier Steele that clinched it and it was the Dragoons who were forced to recoil in disorder, covered by the Lancers. 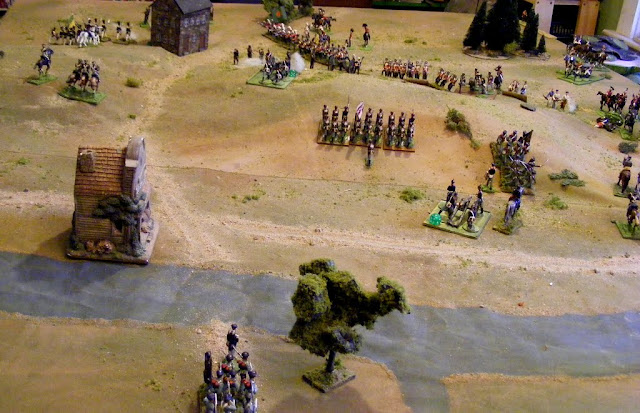 With reinforcements arriving every turn and the enemy's attack stalling, the Republican forces were beginning to believe that they could hold this position until night fall. If they could just hold onto the initiative, the left hand battery could fall back and join a line with the Blue infantry and right hand battery. 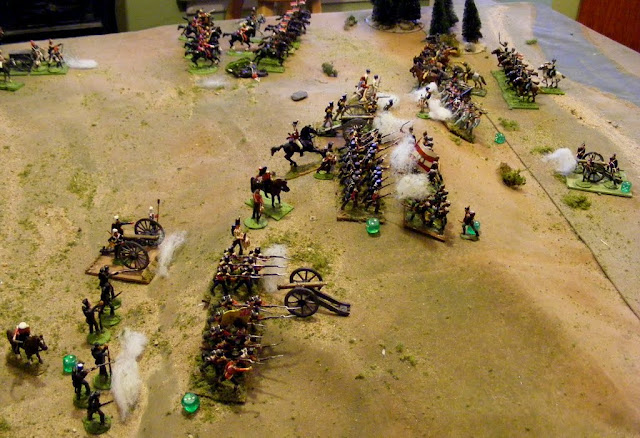 Uniake Fusiliers sweep up the hill to capture the battery.

Fatigue however was beginning to take its toll and despite early reverses, the Queen's army grabbed the initiative and kept it. Along the crest, Red and Blue infantry traded volleys at point blank ranges. As the Blue gunners began to think about retreating, The Victoria Rifles redoubled their fire then before the gunners could recover, the Uniake Fusiliers fixed bayonet and stormed uphill, passing through the Rifle's skirmish line. Brigadier Zinn sent orders for the 1st Dragoons to retake the battery but still shaken by Sunday's carnage, these horsement hesitated and by the time they finally crossed the valley, a disciplined volley from the Fusiliers was enough to send them galloping back down the hill. 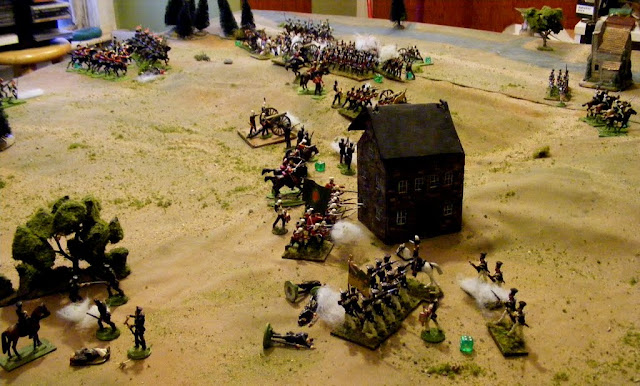 The Lafayette Volunteers drive back  the Victoria Rifles.

On Blue's left, the Bangor Rifles were finally driven from the village and destroyed as a fighting unit. Unfazed, the Volunteers pressed forward with the bayonet, driving the Victoria Rifles out of the battle, but as they turned to face the Wye Regiment, fatigue and casualties were starting to take their toll and Brigadier St, John, barely recovered from his wound, led them back to regroup.

On the far side of the battlefield, Colonel Flowerdew took command of the cavalry, speaking quiet words of encouragement, he sent the Lancers forward against the Light Horse while leading his Dragoons up the hill into the tattered Blue Infantry. In an instant it was all over, this time a volley from the  Light Horse was ignored as the Lancers crashed into and through them, driving the remnants and destroying them as a fighting unit. pressing on they fell on the Blue Dragoons and broke them as well, driving them into the river.  Keeping pace with their comrades, the Red Dragoons swept up the hill, over the remnants of the 1st Infantry, dispersing them and then riding into and over a battery of guns. Brigadier Zinn himself had to spur his horse to escape into the ranks of the 3rd Infantry which had arrived but which had refused all orders to advance. There was nothing left but to retreat the few remaining units as quickly as possible. (ed. One could say that with 5 units out of 11 destroyed and 2 more at their break pont, the army's morale had broken.) 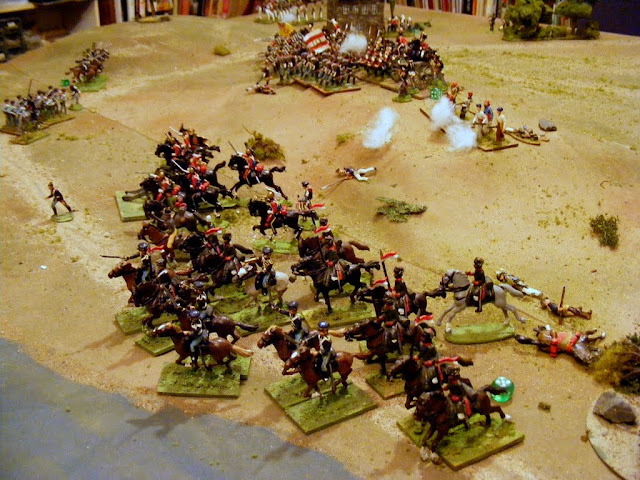 The Queen's cavalry sweeps the field.

The Queens army stands victorious and an unprovoked invasion has been repulsed  but it has its own wounds to lick and there is no talk of an immediate pursuit over the border into Oberhilse.

Tomorrow, we will present an analysis of the technical aspects of the campaign by Col MacDuff (Ret) .