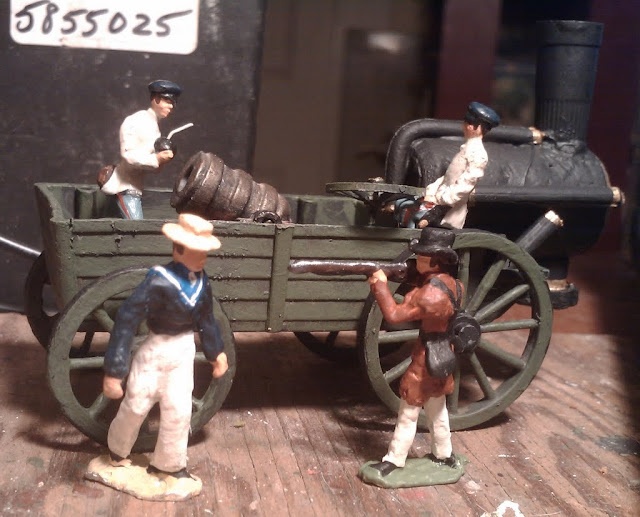 The first almost complete casts are out of the latest mold, a US militiaman in smock and round hat and a sailor. Not the best job I've ever done turning a master into castings but not the worst either since it looks like they are usable even if needing to be replaced. After 30 minutes of testing and venting I have a produced a couple of almost complete castings but each will require about 5 minutes work to clean them up never mind lost detail, (in addition to the detail lost to the lighting) no bayonets, missing chunks of hat brim, etc. At least they have arms now!  The sailor is open handed and can take a musket or artillery implements or just run around crewing things.

I was wondering  how many people would question the ability of the wagon to survive having the mortar fire. (1.5 so far is the latest count I think **** This comment is not intended to imply that anyone has been in the slightest negative or less than positive and supporting, Just the opposite in fact***)   I'm sure there must be a steam punk explanation, some sort of steam-hydraulic shock absorber thing mounted underneath where you can't see it, but on the other hand it belatedly occurred to me that I could probably turn spare 25mm barrels into 40mm swivel guns which is more what I envisaged originally. That would also answer the question of what the sockets are for.
Posted by Ross Mac rmacfa@gmail.com