The first half of the Lafayette County Rifles received their uniforms today. They don't quite have the polish of regulars yet but some more drill and a 2nd coat of varnish should fix them up. 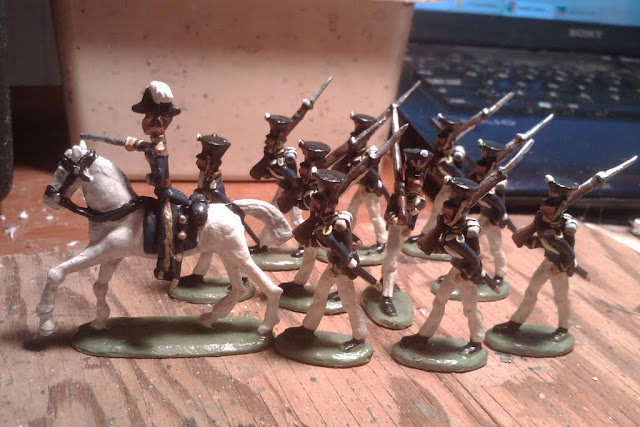 I normally avoid painting white horses in Toy Soldier style. They tend to come out blotchy and without shading and washes, there is no where to hide. He just seemed  like a white horse kind of guy though.

The HofT draft has received some more proof reading and minor changes such as a movement penalty to foot or siege artillery which moves.

While backing up some files I came across the original (2003) Morschauser Meets MacDuff. I have this nagging feeling that its better than most of the intervening versions. Oddly enough, one of the things that made me uneasy was how the rally chart worked, a successful rally brought back 1/2 of casualties. I've been worried with the return of the Rally to HofT that a big unit will take longer than 2 small ones to recover after losing a melee. When I reread the original, now that I understand that the hits are about morale and cohesion as much or more than casualties, the original rally suddenly made sense! So I updated the rally rule. The latest draft has been updated but I have also added a link to the original.
Posted by Ross Mac rmacfa@gmail.com