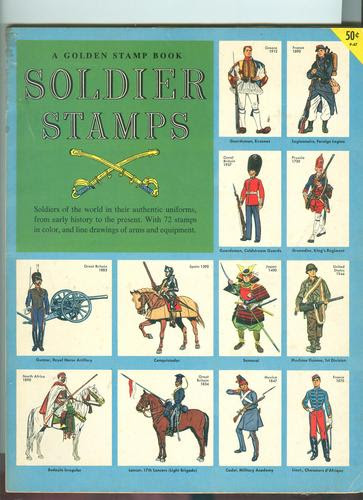 While I was pondering just what native Atlantican regulars (not to mention irregulars) looked like, I realized that I had a vague, not quite remembered image in my head. After mentally rummaging through various possible sources it came to me.

One of my very early books, probably when I was 7 or 8? maybe younger, was the Golden Stamp Book of Soldier stamps. A very influential and formative book which I occasionally forget about consciously. I don't think I ever forget it unconsciously. I hadn't realized until today when I dug it out and looked through it, just how many of the stamps have inspired wargame units (or armies). Just looking at the front cover, I've never done any Samurai. That's it, which is worrisome in an "Invisible Finger" way.

Anyway, it turns out the picture in question was of an 1800 Haitian rebel in French habit-veste, bare calves and straw hat. This one got opposing wargame armies in 15mm.  The Atlanticans won't look like that though they may wear similar straw hats.