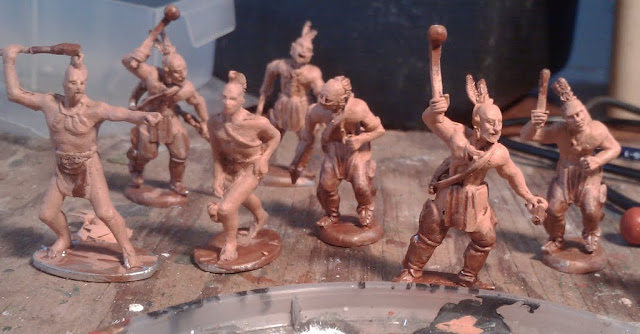 5 more S&S Indians backed by 3 Prince August Skraelings showing their priming of varish + burnt sienna and a base coat of flesh mixed with burnt sienna.

I feel like I should add some clarification to my comments on the first batch. I did not mean to imply that I was in anyway unhappy with them or thought poorly of the result in any way. In fact, they are probably some of the best non-Glossy Toy Soldier style figures I've done in a while.

However, I cannot vouch for the accuracy of some aspects such as the patterns of war paint or the shade of buckskin (actually I grabbed the wrong paint pot so they weren't even the colour I intended  but being a natural item I let it slide as within reasonable variation). Once upon a time I might have been more concerned about that. (i.e. at least vaguely so) 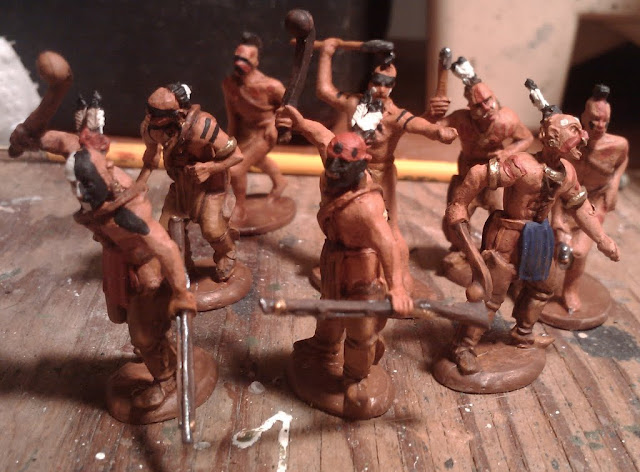 and the finished band.

There were also a lot of detail on these figures that I didn't bother to pick out. Once upon a time I would have picked out say the knife sheathe in a slightly different shade  from the leggings etc or added some porcupine quill and bead embroidery and so forth. Now, when I do bother to do the extras, I find that it doesn't increase my enjoyment of the figures afterwards, hence not bothering to do it

Its a change, that's all. Some of that comes from eyesight but a lot comes from gaining an appreciation of the the simplicity of toy soldier styles which focus on the over all effect rather than distracting the eye with detail. This has been reinforced by a conscious effort on several occasions to study re-enactors from a distance with an eye to figure painting. Its amazing what one doesn't see. The view through a telephoto lens is very different than that of a wide angle. 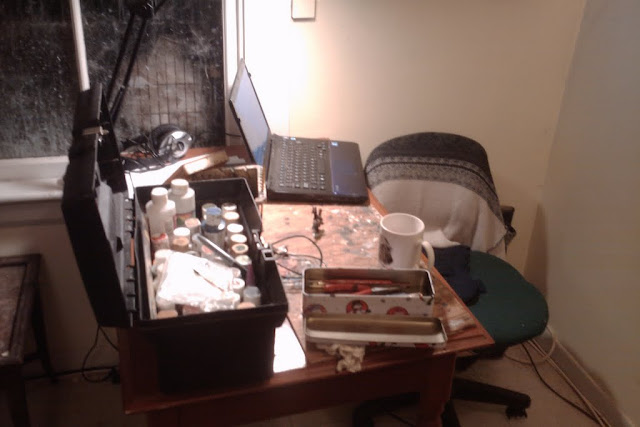 and my new painting station in a corner of the family room.