Not sure how many backwards. The main conclusion so far is that I'm really tired today and its not a good day to make any big decisions.

I did finally get Scenario 1 from Programmed Scenarios laid out. To my dismay, the 20 man units didn't fit well. This is only a medium size game and I was running out of room to deploy, let alone maneuver.  16 men don't sound like a lot fewer than 20 but it seems to be just enough. Which is why I had decided to go that route last fall now that I think about it. 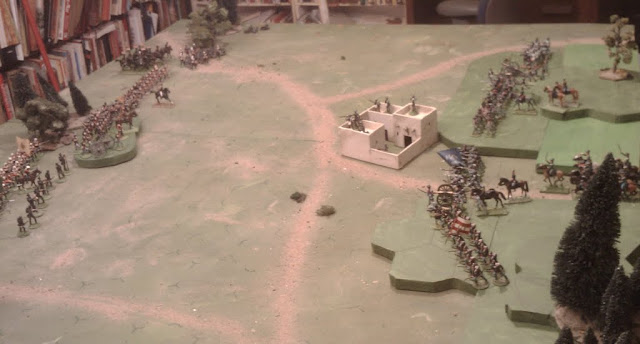 
I did some refreshing on the idea of using rules with battalions as units to fight battles where each unit is actually a brigade. I was getting all excited about it but once I laid the figures out today, I realized that in practice,  I think that I'm going to have problems with that, esp with 40mm figures vs terrain, and with trying to forget about scale for weapons, unit frontages, etc. I think I'd be happier using brigade stands, small figures and small terrain but maybe if I use fictional armies I won't confuse the resulting generic scenarios with the historical battles. Luckily I already have a start on fictional armies.  As an aside, the Blue force chosen from the list for this scenario is very close to the American force at Palo Alto while the Red force is not so far from the Mexican one. Interesting.

Anyway, there are certainly campaigns where forces of the size used in the scenario books (and of the size that will fit my table) did do battle so I won't fret about not being able to field corps and divisions. Its a question of getting just the right balance of rules. It turns out I may have made an error by joining a new Yahoo rules discussion group. There has been some interesting discussion but my toy soldier mojo is hiding and needs to be coaxed back out because as much as I am fascinated by the history and ways to recreate it, too much reality can kill the fun in a game of toy soldiers. In any event, I'm going to sketch out yet another simple MacDuff derivative tomorrow,  aimed at just the sort of 5-8 battalions + support games that I'm planning to do with the glossy 40's and not trying to do anything else, not initially anyway. One of the issues I've had with rules for the last 20 years, is the disconnect between game movement and generally what can be done in a certain amount of time vs what happens in real life. There are so many things we don't know in detail, so many things that we don't usually try to model (partly because they aren't fun),not to mention that real life doesn't happen in "turns" like a game and that we are conditioned to expect things to be a certain way.  (and no, I don't have a magic bullet for this one.)