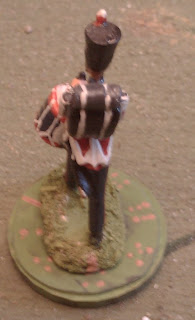 This morning's 1st prototype w magnetic base
For those of us pondering more elegant ways to mark hits, Steve Gill has found a company that offers exactly one of the things  I was trying to figure out how to make.

Just scroll down to see "casualty marker" in 2 formats, 1 with a figure added as an example. I might use drummers instead of dead guys, after all, the massed drums normally formed up behind their battalion, so a better use for them than being squeezed into the ranks.

Litko appears to have something similar in plastic.
http://www.litko.net/products/Casualty%7B47%7DDamage-Token-Dials.html

and I imagine other companies probably offer similar products. or I could keeping working on inventing one.

Hunh! How about that.
Posted by Ross Mac rmacfa@gmail.com