A cat in the elm? Arf Arf Arf eh? This is a willow?

Yes, I have been barking up a wrong tree again!

The original MacDuff showed it Charge! roots primarily in its organization and in the way it treated morale. Units had to retreat at 1/2 strength and musket fire during charges helped determine who won rather than  resulting morale stopping the enemy short due to morale checks. I was always happy with that.

At least I was until a friend argued that it should be possible to stop a charge by fire alone, especially if using breachloaders on spear armed tribesmen. I argued that melee wasn't really hand to hand combat and figures that were removed didn't directly represent dead and wounded and that the over all effect was right. Eventually, he won me around and for the last 5 years, I've been trying to integrate a morale system that would provide an intermediate reaction, including the ability to repulse a charge by fire alone.

During the last game I noticed that once again, the latest version favoured certain unit sizes over others. Later while working on the reaction system which is meant to help compensate for the lack of simultaneous movement and firing, I noticed that I had gotten to the place where opposing units could each force the other to run screaming in the opposite direction. After some more thought and poking and reading, I have once again removed the morale rules apart from a penalty for being below strength.

That of course required redoing the melee and reaction sections as well. The results have been uploaded but not tested. 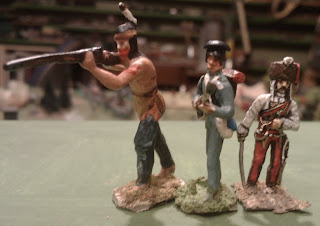 40mm? Really?
The Hussar is a Minifig 30mm figure. The Scruby in the middle is about 1/2 way in between.
Maybe I should be calling my armies 36mm?
Posted by Ross Mac rmacfa@gmail.com