I am happy to report that today I enjoyed a 4 player Rough Wooing game at home. Normally 4 people are quite a crowd in my games room but luckily I was able to squeeze 3 of them into a little box off to one side. 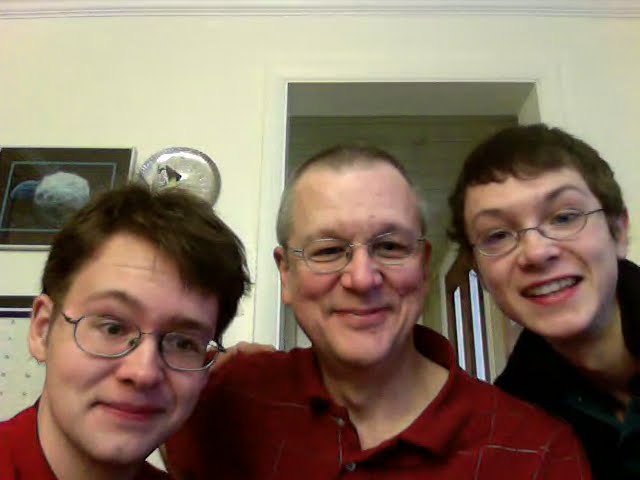 I was supposed to be the away player today but logistics dictated a change of plan so I hosted again. What Rob & I needed was a scenario which would allow a pike clash to test the rules for that sort of thing, but also a new scenario to take to Huzzah in May. I proposed Scenario 10, the Alliance from Programmed Scenarios.  This scenario calls for 3 allied groups to try to block a common enemy from exiting their side of the table. It seemed just right for Highland and Lowland Scots with French assistance but that would mean Bills & Bows again so I scraped the barrel for enough Landsknechts to take us to the continent with a unified French force facing an Anglo-Imperial alliance. I was all set to use the Player + 2 programmed allies option for the defenders but luckily Rob's sons were at hand and able to be pressed into service. 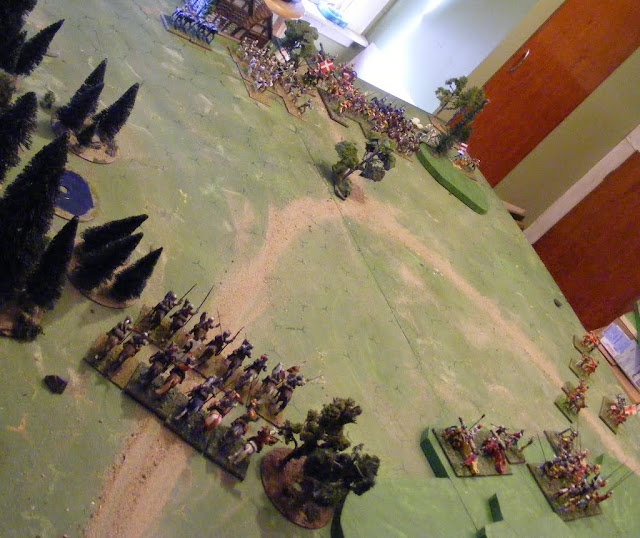 An overview of the deployment. I suspect this is clearer than what the remote players saw.

In Rough Wooing, our 16thC rules originally inspired by Morschauser, each stand is a unit. When translating the scenario forces for Rough Wooing using my forces and table, I usually use 2 stands per unit except for guns where I field 1 per battery. On a 10 ft table with both armies present we would usually double that. As it the opposing armies ended up as follows:

The Alliance. On the left was an English Force with 2 stands of Sword & Buckler men, 3 of archers and 1 of arquebusiers. The crucial interest of this body of light infantry (presumably a safe escape to the coast) was through open ground on the right flank. On the opposite side was a body of Imperial cavalry whose interest led through a swampy wooded area. Two stands of men at arms on barded horses, 4 stands of lancers and 2 stands of light cavalry.  In the middle was a body of Flemish Landsknechts with 2 guns. Their commander was in over all charge but due to language and political issues, his role was limited to deciding which player on his side would activate when a red intitative card was turned.

The French. The French, led by the Duc de Havre Grace (wearing the armour of the Duc de St Lambert to confuse the enemy and inspire the men.)  had two blocks each of 6 pike and 2 shot (1 Swiss, 1 Scots)  and 2 limbered guns in the center. To the right was a flank guard of 2 stands of Gensdarmes. To the left was a battle of 4 units of shot and one with 4 stands of lancers and 2 of mounted arquebusiers.

The battle opened with and an echeloned advance by the French, heading for the open ground held by the English. The Scots on the right seemed to have been particularly bothered by their open flank and the sight of numerous cavalry as they managed to move a bare 9 inches on the first 3 turns (rolling 2 dice per turn for inches). Due to the cavalry threat the game was nearly over before they were ready to advance again. 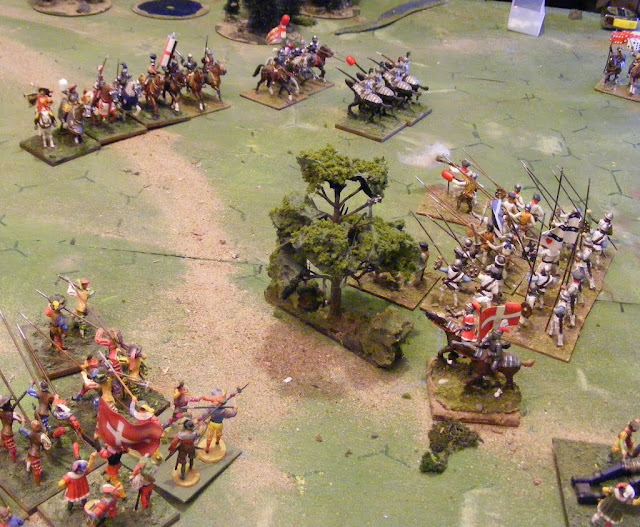 Undaunted by numbers, the English archers stepped forward and opened fire, expecting to devastate the foe as usual. Unfortunately a light rain shower had dampened their bow strings (or maybe the dice got wet). The French cavalry spurred forward and tried to match their dice, roll for roll, but eventually their hatred of the old foe overcame their politeness and supported closely by the French shot, they rode down and routed the English though not without cost. 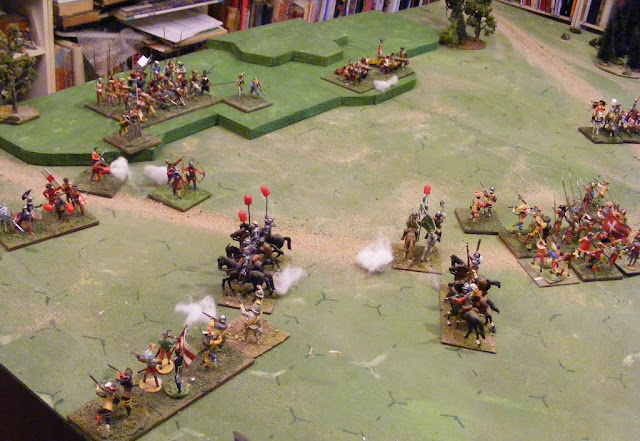 The red and white baubles mark hits, groups can spread hits out but the 3rd hit on a stand will remove it.

On the right the Imperial cavalry came forward. Sending their light cavalry sweeping wide, they surrounded the French Gensdarmes and were cut down. Oops. The 50 year old Gensdarmes then shrugged off a rear attack by light cavalry while the Scots arquebusiers crept forward far enough to start sniping at the main body of heavy cavalry. It took a few more charges but eventually the last Gendarme went down but the Imperial cavalry was badly staggered. (8 vs 2 supported by 2 shot and they barely won, I'd better get painting more proper Imperial heavy cavalry).

There was still a chance that the Imperial cavalry could slip past the pikemen and chase off the French left wing but some Scottish sharpshooting took its toll and with the Battle 1 hit away from breaking and the time running out, we decided to jump ahead. Despite their best efforts, any pike clash  was at least 3 turns away and the Imperial pikes, stripped of their shot by some hot French shooting, were standing all alone in the face of French shot and cannon. We decided to allow some French shooting and then slipped the Swiss forward and did the charge. With a  mighty clash rolled up into contact and despite the disadvantage of fighting uphill, they pushed the Flemish back to the edge of the table. 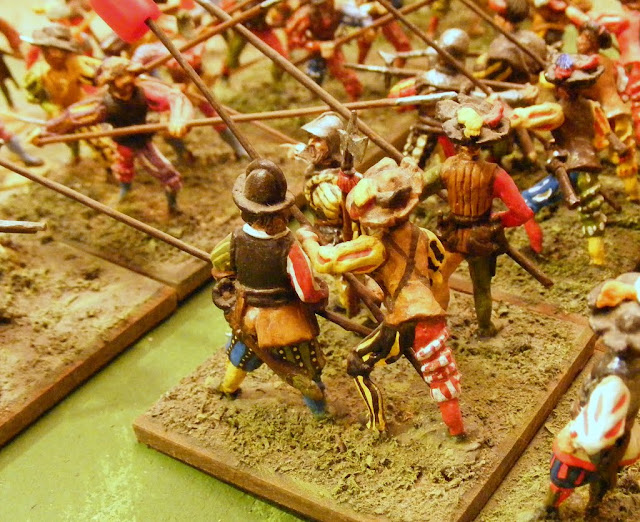 A typical pike stand, the figure in Morion is Irregular ECW, the double pay man beside him is a Sash & Saber Landsknecht while the 2 behind him are homemade from scratch, amongst my first sculpting efforts. These homemade figures form the bulk of my 16thC armies.

At that point we had to call the game but it was a clear French victory despite the serious delay and a staunch defence. 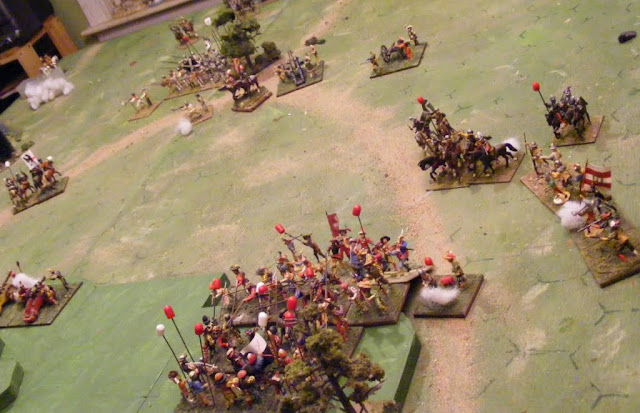