But its coming on time to make up my mind. (Yes I know, another sappy musical lead in, but just a Spoonful, no links this time)

Actually, I thought I had made all the decisions I needed but while playing around with the F&IW skirmish and last week's border brawl and thinking about the War of 1812, I realized that I had missed something. No its not the skirmish. I'm pretty sure Prince Valiant will give me all the 1:1 skirmish games I need but if not, there'll be a few big homecast musket types figures hanging about. PA Indians and the like. No, its just that while getting back to the fictional setting and adding some cavalry and the like, I suddenly realized my head is still secretly planning an almost 1812 wargame campaign full of small border clashes between a handful of troops where a clash of 8 battalions is a Mega Battle. My imagination on the other hand, is still secretly planning to fight a scaled down Waterloo with 200 40mm figures on a 5x6 table. Either is possible but these are not easily reconciled objectives!   One needs to be the main thing, the other a side thing, a game in a box.

There are 2 main roads that I would be willing to take my glossy toy soldiers down. One is the OSW route of individual figures in 20-48 ish figure "regiments" , a dozen of which will let you fight battles with the scope of Gettysburg if you have a strong imagination. The other is the Morschauser/V&B approach of a few figures on a base being a unit (yes Morschauser had 5 such "companies" to a regiment but he was very clear that the regiment had no role in the game, each stand was a separate unit in every way).  I thought I had resolved this but really I had only dealt with the element approach where a unit is several stands. 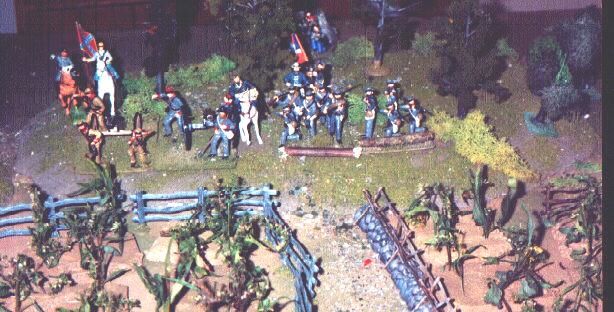 A rather poor image of a late 90's 54mm Volley & Bayonet game based on Cedar Mountain.

If I were to completely go over to the 'Dark Side', I would probably polish up hex terrain and use hexes for  both ancients and generic 19thC Horse & Musket, my grid of 270 hexes would allow me to field perhaps 24 units aside, each somewhere around 8 or 10 infantry or 3 or 4 cavalry stuck on an 80mm base. Using glossy toy soldiers for this would call for nice thick, bevelled bases to make each unit look like a playing piece. More Volley & Bayonet or MOB on Steroids than Charge! or Little Wars, but with 400 or 500 figures required, a main event not the sort of Game in a Box that I had in mind and there is no room, time, or energy for 2 main events.  The alternate plan is to use my 20mm ACW figures for Big Battles, possibly using HofT with the CM scale or converted to hexes with 2 stands being a unit.

However, before I explore this angle any farther, and before I get stuck into more painting, I need to go back to MacDuff, individual soldiers and a Lawford & Young-ish/Grantian approach to scale and mixing battles and toy soldiers and play the biggest game that I can fit on my table using whatever I have to hand. I was pretty happy with the feel of the Plattsburg game last year, I want to double check that is still the direction that fits. If so, then its time to get on with it.

In the words of Davy Crocket. "be sure you're right then go ahead"