Word has just been received of a short but fierce battle this afternoon. It seems that Brigadier Zinn has taken charge of the retreating Republican forces and at Rawdon Gap he turned at bay. 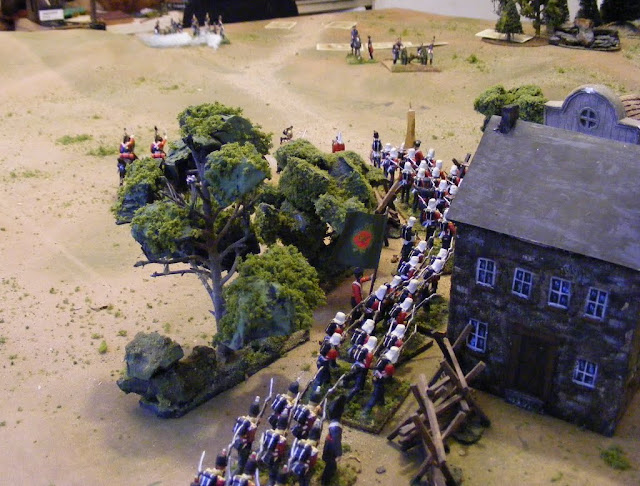 General Zinn, a past master of rearguard actions, made skillful use of dead ground to mask his forces so no one is quite sure of how many Blue troops were present. However, the 2nd Dragoons, Frontier Light Horse and elements of the Blue Guards, 1st Infantry and Layfayette County Rifles were identified as well as 3 batteries of artillery. General Turner had his whole force from the surprise of Blue's camp as well as the Victoria Rifles who marched hard to catch up with the rest. 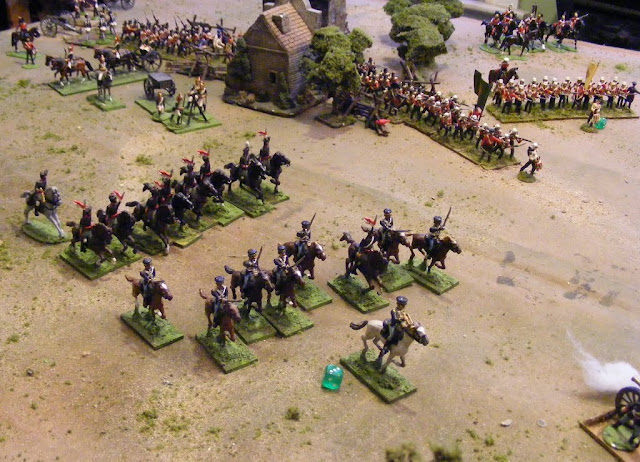 Once again the Queen's cavalry and the ever bold FTC Rocket Troop were to the fore front of the action. Indeed the rocket troop galloped so far forward that Blue's 2nd Dragoons appeared from behind a hill and made a dash at them, only to be met and thrown back by Larsen's Lancers. (ed this was an example of the reaction system at work. The Blue dragoons could not see the rocket battery at the start of their move so could not charge it, instead they advanced into charge reach taking care not to use any maneuvers which would rob them of their reaction. When the battery later fired on them, it triggered a reaction in the form of a charge by the dragoons. This in turn triggered a response by the lancers who intercepted the charge. The Lancers, being Light were at a disadvantage but threw back the dragoons anyway.) 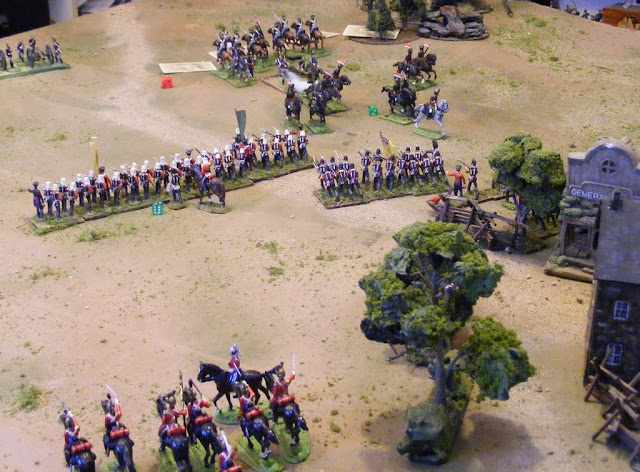 Its the Lancers turn to charge and be repulsed against the odds.

As Brigadier Stonefort deployed his brigade and advanced on the enemy guns, the Lancers took a run at a light battery posted on the hill. It was a job for the heavies though and the first blast of canister was enough to send them scurrying back out of range. 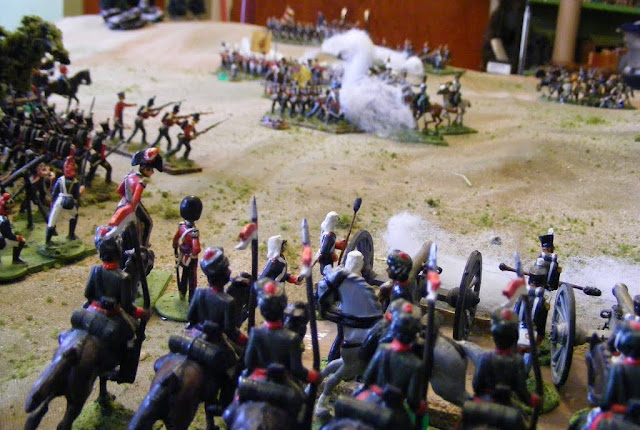 As the 1st Brigade of the Queen's men approached what the men are calling Artillery Hill, the skyline suddenly filled with Blue infantry who opened a furious long range fire. We must assume that the Queen's officers were tired after fighting a battle and marching all day as they allowed their men to halt and open fire at long range for them but canister range of the guns. (ed. No dice involved just knee jerk judgement ). Soon the artillery began to cut swathes through the red coated ranks as Blue's infantry slowly closed the range.

The rattle of musketry had no sooner broken out than the Blue Dragoons once more appeared galloped forward, catching the Uniake Fusiliers by surprise. At the urgent call of their officers they ran to form square but a few of the Blue Dragoons broke into the regiment before the square was fully formed.  For a moment it looked like the square would collapse (ed. until the rule was quickly fixed)  but after a prolonged struggle the Dragoons were finally evicted. The Fusiliers however, were a spent force and the handful of survivors retired to safe spot to lick their wounds. Forward the Cavalry! Bring up the guns!

General Turner is used to these sorts of crisis and is not easily fazed. Recalling the Princess Charlotte Dragoons from his left flank, he sent the cavalry forward towards the Eastern shoulder of the gap supported by The Royal Fusiliers and the Voyagers. The Wye Regiment was ordered to fallback and rally while guns were brought forward to silence the battery on the hill. The Victoria Rifles, finally arrived on the field, were sent forward to take over the fight with Blue's infantry. The crisis was at hand. If Brigadier Zinn's men could repulse the coming storm, it would be dark before another attack could be organized and he could slip away in safety.

Princess Charlotte's Dragoons rode slowly to the top of the ridge, paused, drew their swords then as the bugle rang out, started forward. Below them the light battery scrambled to limber and retreat while the weary Blue Dragoons pushed past them to meet their red coated opponents. With a  tremendous  crash the 2 bodies of heavy horse met. For a few seconds the whole mass seemed to rise in the air  then oh so slowly started to move down slope. It moved faster and faster then like a damn bursting, a flood of Blue horsemen galloped to the rear pursued by triumphant Scarlet riders. In a flash the light battery was over taken, the gunners cut down, the guns seized.

Would the enemy stand and be caught? Not the wily Brigadier Zinn. Better to save his army for the next fight than to lose it fighting this one. The remaining batteries limbered up and as the Guards held the line, the guns and the 1st Infantry retreated from the field. The Light Horse began to look over their shoulders but their Colonel could see that the Lancers would be on them in a flash as soon as they turned their backs. There was only one safe way to go, drive back the Lancers then pull back. The men pulled their  rifles from their buckets, rode forward with a yell to be met by the stern Lancers and were scattered to the winds. The gap was open, with 1/2 an hour to spare. (ed. 2 turns as the soldiers put it.) 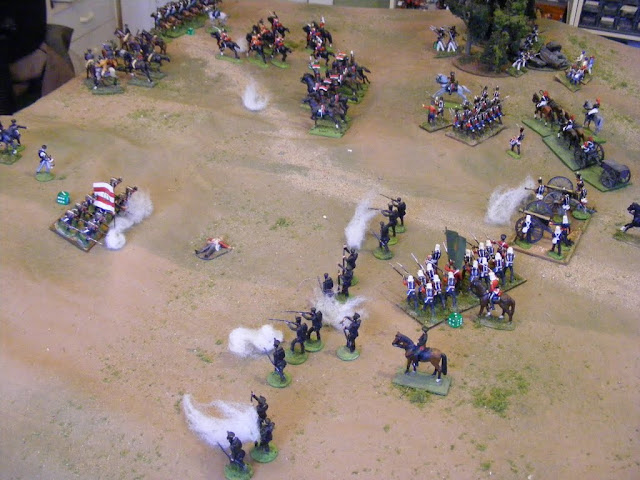 The ground was won and the pursuit could continue but it was a costly victory. By seizing their moment, the Blue troops had inflicted heavy casualties for almost no loss apart from the light battery. The Queen's infantry however again took heavy casualties. The Dover Regiment, unscathed in the first battle had been wiped out, fighting to the end, the Uniake Regiment has been reduced to a 2 company rump while Princess Charlotte's could muster a bare 2 squadrons by the end of the day. Are there enough troops left to do the job? We shall know soon enough as they are bound to catch up with the enemy again tomorrow.