Filling in the Gap 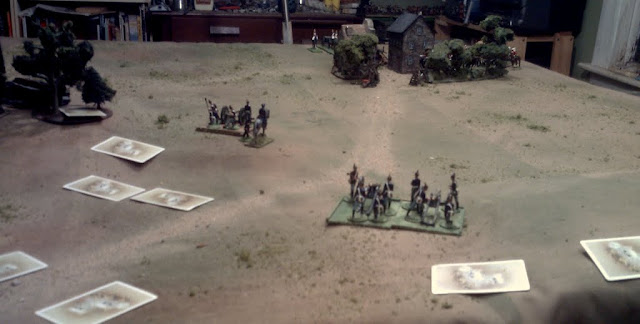 1. Multi-figure stands vs individual figures.  Some of you may have noticed that this game suddenly looked more like the one in the header than past ones. The bases are only 2" wide rather than 60mm but I'm back to my 2007 plan of 4 bases each with 6 infantry or 2 cavalry and happy with it. Going through various basing and rules options as well as styles and looks has been an interesting experience. I'm not sorry I took the trip but I'm glad I'm now in a position to make a final rather than tentative choice for this collection.

Oddly, it wasn't pushing the individual figures around the table that finally tipped me over the edge, it was how disorganized my troops got as casualties came off and how much time it took me to set up, the number of figures that got tipped on the floor as I tried to carry a tray and tilted it a few degrees as I turned and especially the amount of time wasted in cleaning up after a game, finding stray casualties mixed in with other units, tucked onto a convenient bookshelf, table or window ledge when they were removed in the heat of action or dropped on the floor and rolled under something or forgotten inside a house.  I'll try to leave my old Britain's on their own bases.

2. The table. As part of the Classic Toy Soldier thing,  I have been experimenting with contour hills on a flat table, all in bright green. Partly this is because I like the look but mostly because the single metal figures wouldn't stand on a cloth over hills (the plastic Elastolin Prince August figures on 1" bases do). The plan is to eventually finish up  the green table and a limited set of hills for use with the Britain's but to revert to my old format of cloth over hills for most games.  If nothing else, its much easier to model specific battlefields when what is forming the hills is hidden, and it doesn't take much room to store them.

However the cloth I usually use was made 15 years ago for the battle of Chateauguay, fought in a clearing in the woods in October 1812. Its time for a new one or rather a selection of new ones. Eventually I would like a Northern spring/early summer green farm hills cloth, a snowy winter cloth, a dusty hot plains cloth and maybe more for specific battlefields.

3. Campaign Casualties. As I was clearing away this afternoon, I couldn't help looking at all the hits on various units and thinking how the current campaign rule, written when I was taking off stands as soon as enough hits were inflicted, didn't reflect that. So I have adjusted it. I allowed each unit with hits to make a post battle rally rule then divided the remaining hits by the appropriate morale factor (2 for militia, 3 for regulars and 4 for elites), dropped fractions and removed that number of stands.  A little harsh on the already battered Oberhilse units but on the other hand most of the Faraway regiments lost a stand. 1/2 the missing stands will be returned for the 3rd game.

4. Deploying the hidden Blue units. One of the strengths of the position in the upcoming  scenario is that the defender can deploy reserves in dead ground. One of the problems with doing so solo is that either I know where I put them or the deployment is random. My usual solution to that is to deploy a dummy for each unit, shuffle the cards of each type (infantry, cavalry) and deploy them face down. Now I now where possible units are (I can see the cards) and I have some idea which might be cavalry or infantry but I don't know which ones are the blanks. Its not totally random but there is still some uncertainty.

5. Artillery and Hearts of Tin. This should have been #2, oh well. This is one of those "tempest in a teacup" issues.


Tomorrow is supposed to be a snow day so I expect to play the 2nd game. Hopefully I have new batteries somewhere for my camera!