Bar Room Brawls, Battles and the Border Between Them

It often seems easier to grab something at one end or the other.

Bar room brawls are fairly simple to game (not that I've done a lot of that sort of thing on the table top or in real life). They need to be fast and furious and can be most easily handled at 1:1, both in terms of figure to real men (or women or aliens etc) and in terms of scaling the terrain to the figures. Doing Waterloo at 1:1 is so impractical as to be generally dismissed. Most battle games therefore use some sort of scaling down. Yeah, OK, So?

Well, there is of course a place where one comes to a  "too small to be a battle, too big to be a brawl" situation. The sort of skirmish in which a hundred or 200 or 300 etc men took part. Yes, you can game that 1:1 on a 12 foot table using 10mm figures but it would be beyond most gamers to do that with even simple rules which treated individuals as individuals each with his/her own stats etc. So, we scale that down too but at some point there comes the question of when to stop dealing primarily with individuals and start dealing primarily with units. .

Suffice it to say that this week, it occurred to me  that my singly based Toy Soldiers could be used either way. The question is, is there a reason to do so? The proposed action  is to play a raid scenario both ways, 1st, using MacDuff  and then with Musket Mayhem,  the F&IW version of Medieval Mayhem, (loosely speaking).

The game will be Battlegames TableTop Teaser #4. Plunder and Pillage. The setting will be Atlantica, on the verge of some major political upheavals. (yes, yes, more on that later as I discover the details and confirm or disprove rumours of a movement to Unify the States of South-Eastern Atlantica and of rebellion and a push by the FTC for Imperial involvement to stabilize things. )

Mean time here is a clearer overview of the table. Red has an outpost across the river on the edge of a well populated farming community in Pleasant Valley with more troops close at hand. Oberhilse has dispatched a raiding part to collect supplies and devastate the are in hopes of not only hampering Faraway actions but of de-stabilizing the area politically. 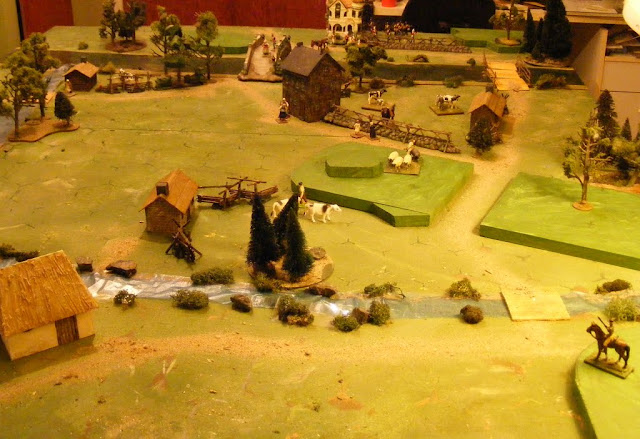 There are 4 farms in the area in between the Harde River and the stream plus one in red territory just to the left of picture. There are 2 bridges across the river and 2 plus a ford across the stream which is fordable every where with some difficulty. Technically the area between the stream and the river is Faraway territory but there are no red forces there. It is a sort of  Neutral Zone militarily. Blue's success will depend on how farms can be destroyed and how much loot loaded on wagons and hauled away.

Terrain has been on my mind again. How much and with what effect? There should be a lot more fencing, (not to mention barns, streams, gullies, dips and rises etc.)  so much more so that the game would look and feel cluttered and troop moves would be hampered more than in real life. As the number of troops have been scaled back, so too with the scenery and only a few token fences have been placed to suggest the reality.  The question is, since an area of farmland is assumed to contain various fences, ditches etc all of which disrupt troops and have been taken into account by slowing movement from the optimum, is there a valid reason to penalize troops for crossing the ones that are shown?

It would feel natural to do so as long s the penalties are small. Once could say that the penalty would stand in for all those not shown and anyway there is something to be said for increasing atmosphere in a game which is admittedly already more atmospheric than realistic. On the other hand, the game might play faster and more smoothly if they are treated as for show only. Hopefully the jury will come in before the game starts.

An easier question involves the streams. It probably varies across the globe but around here, which is a lot like Southern Atlantica,  most streams gather a fringe of trees and bushes and often create or run in gullies. Therefore as odd as it seems, streams will block line of sight unless other wise noted.