We all know who's fault this little diversion really is. I was minding my own business, sorting out regulars, gluing them onto bases and calculating which regiments needed more figures, when Someone suggested  I write a mini-campaign. The next thing I know, the urge to fight some kind of colonial action, that I've been struggling to suppress for the last year has burst into flames again and the most urgent thing in the world is to figure out what the North Atlantican tribes looked like, and a little about their society, politics and methods of warfare and who their friends and enemies were.

Its not always easy identifying reliable sources of information about fictional peoples and places.

Apart from a browse through 2 Osprey's on South Africa which does have some similarities, most of my time was spent on the net as I have very little on the peoples of the North American Plains and West Coast and on those from South America. These 4 places  provide the closest parallels to the colonial experience of the Atlantican peoples, apart perhaps from the Northern Kingdom. Actually much of what I wrote about in 2009 when considering an Oregon Campaign is applicable to North Atlantica in some way.

For things like skin tone though, sometimes ts best to go to original sources, and luckily I had some to hand.

Its interesting that both Britain's and LoneStar portrayed both flesh colours, the more common reddish shade and the rarer dark brown of the coast. Unfortunately they have been given American Plains Indian headresses though the yellow bonnet is close to some Atlantican styles.

So far I have identified 3 main groups and  1 minor one. The minor ones are the cannibals of the coast. They are a small, poorly organized tribe and don't play a significant role politically. They probably wouldn't play any role at all if it weren't for certain mineral and other riches to be found in their jungles. As it is, hostile feelings to whites have been raised to the point where small raiding parties occasionally leave the jungle to work with various allies.

The largest, most powerful, and least relevant at this point is the  realm of King Watsisnaim. which is currently at peace and trading happily with the Faraway Trading Company FTC). Of the bulk of the various small Atlantican nations, many of the farming tribes have come under the sway of the king but most of the herding and the hunting tribes are still free.  That leaves one group which has cropped up several times in battlegame reports but usually misunderstood and poorly represented.  The Brethren, as they call themselves, are a mixed race, mostly Atlantican but including both whites and some Africans, (largely escaped or freed slaves ) with a high percentage of people of mixed racial heritage. Based on several fortified towns along the coast, they do ranch and fish but their  main economic activity involves the use of small ships for other purposes, such as the transport of people's property, other people's property......this brings them into periodic conflict with the FTC and the Royal Navy. One of their main profit streams is the importation of fire arms for sale to the tribes of the interior. This has earned them staunch allies amongst the tribes but has not endeared them to the Oberhilse settlers pushing north over the mountains. 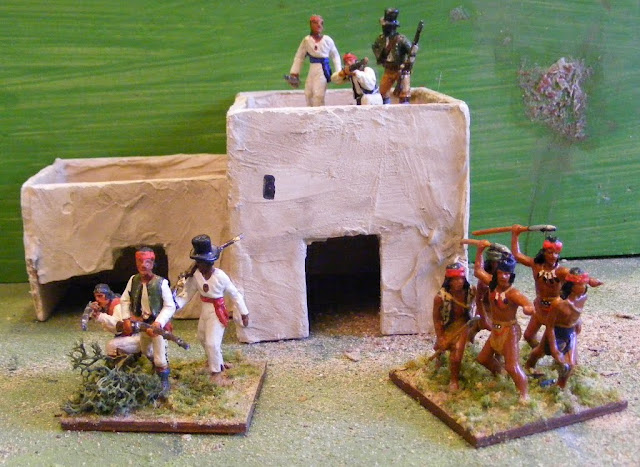 2 stands of Brethern and  a stand of native spearmen who haven't earned any muskets yet, in front of a small but typical Atlantican house.

In terms of dress, all of the Atlanticans originally wore not much more than  loin cloth in hot weather, supplementing this with a cloak or blanket in cold weather. These are usually made from animal hides in the hunting and herding areas but from woven wool in the northern agricultural areas. In the far south, the colder weathers led to the adoption of deerskin tunics and leggings in winter. In the north, the introduction of cotton  led to the widespread adoption of loose cotton shirts and  pants. Hats are rare though felt hats are worn  and there is some use of ceremonial headdress for special occasions. A simple cotton head band is much more common, often brightly dyed. The Brethern are much more likely to be seen wearing items of European dress but loose cotton clothes and head scarves  are also the norm with them. 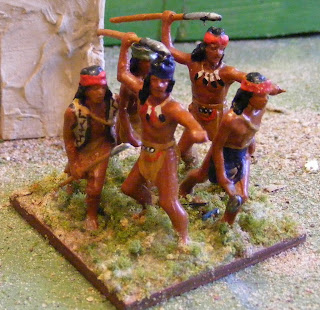 A close up of the newly mustered Atlanticans. The glue is still drying on the bases, it was a hard struggle whether to paint them plain green to match the glossy toy soldier look or just do my thing since they aren't "proper" individual toy soldiers anymore, anyway. Gloss + flock won out.


So, yes, I have been having fun. Thank you Jeff for getting me thinking.