They've just come down from the Isle of Skye

and these kilted 78th Highlanders aren't too shy.
(actually they just came down from my painting desk but click here if you don't know the reference) 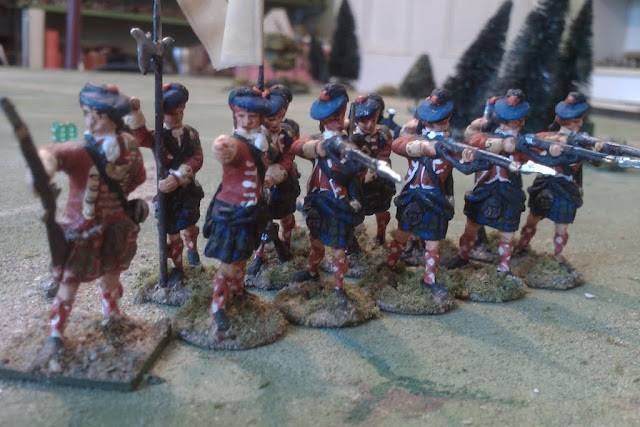 There is some uncertainty as to what sett the regiment used for its kilts. This is a 40 man MacDuff regiment (3x12 + colour party). The grenadier company has bearskins and the red/green Fraser tartan, the center company has caps and the Fraser tartan and now, at long last there is a 3rd company which is wearing the Black Watch or government tartan. They were raised and equipped hurriedly for the Louisburg campaign and may have had to settle for a mix. That's my story and anyway, it'll help to keep the companies straight in the heat of battle.  There are still highlanders in the cupboard. Not sure we'll ever need more for the F&IW so it may be time to add to the dozen Jacobites that Rob and I can field between us.

To be honest, these laddies don't really fit into anything I do at home but they have a story and have a special place in my affections.  It was in 2000 that I first traveled down to visit Rob before Cold Wars. Upon arrival, he naturally took me up to see his war closet and his collection of figures. In my defence, I should point out that this was about 3 in the morning based on when I got up one time zone east, and I'd been on the road for about 15 hours. The plan had been for Rob to meet me at the Airport in Baltimore at about 5. When I finally stumbled off a plane at midnight in Washington, sans my share of the figures and terrain for the games we were going to run and wondering where exactly I was and what I was supposed to do next, this being before we went wireless so I hadn't actually talked to Rob, I was immensely  relieved to see Rob waiting for me. We drove back past the Baltimore airport, collected my bag just as customs was closing (to this day I don't know how my bag made it to Baltimore when the manager in Newark swore that there were no more flights to Baltimore now that mine was cancelled and that he would personally ensure that my bag made the transfer...  He may have also promised to respect me in the morning, I don't recall).

Anyway, amongst the figures Rob was working on was a 40mm Highlander conversion for his F&IW collection. With, perhaps, more eagerness  to help than tact, I suggested that he didn't have the kilt quite
right. On my way home after Cold Wars, I found my luggage heavier by a large bag full of homecast Meisterzinn bodies, heads and parts. Over the next few months I converted 7 figures into highlanders suitable for the F&IW or to serve as well dressed Jacobites and Rob had John McEwan cast them for us. Then came the famous words, "what should we do next? What about the 16thC...." Which is how I came to teach myself how to sculpt.