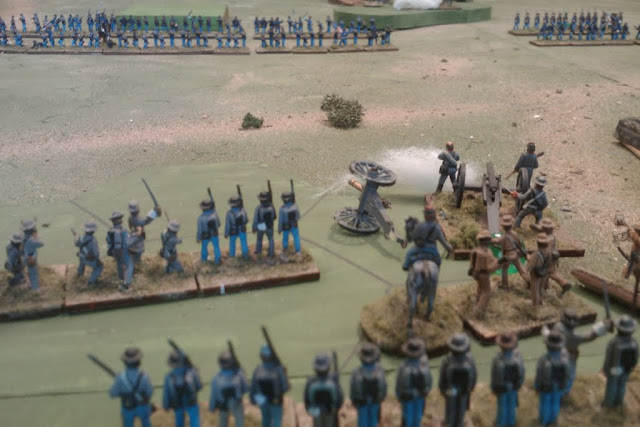 Not that I want to associate myself in any fashion with Dickie but some of my Union regiments are from Ohio.  As mentioned, I finished off yesterday's game using Hearts of Tin, we don't need to mention how Red's attack fared or what happened to the Bodyguard and the Princess Charlotte Dragoon Guards when faced by one scruffy squadron of Blue Dragoons, but the square rules seem to work, just ask the Blue Guards.  However, when I went to reset and try again with the post game improvements and some of the new, ummn Features, removed. I was suddenly tired of trying to round up stragglers, dressing the ranks and standing figures up so I decided that bases were called for even if the rules work without them. Actually I was a bit taken aback by my eagerness to get them back onto their bases. After all, I never did finish the single bases on all the ones I de-based last fall. It seemed smarter to just go with armies that were already based. It made even more sense to use armies which had recently played with the previous draft so I could see how it compared. So off to O-Hi-O or Tennessee or somewhere for Scenario 1, Scene 2.

Where the scenario called for light infantry or cavalry in excess of what I had, I merely fielded another infantry unit. It turned out there were enough stands to give every regiment 4 stands. (They had been painted as 3,4 or 5 stands depending on when they were done.) 2 batteries each of 2 guns, 6 infantry in 2 brigades, a sharpshooter and 2 stands of cavalry for Johnny Reb. 2 batteries, 8 infantry and 1 cavalry for Billy Yank. 3 of the batteries had 1 rifled gun and 1 Napoleon, the remaining, Yankee battery had a 6 pdr instead of the Rifle. Not nearly as good to be honest, 2 Napoleons would have been OK though.

After an hour of shelling (4 turns),  the Union battery in the center was slowly getting the upper hand and the infantry was ordered forward. On the Federal left, the battery supported by cavalry had already shifted forward to bring the 6pdr into action.  The Rebs on the hill got tired of being shot at and advanced which triggered a reaction from the hovering cavalry (who seem to have forgotten about their breechloading carbines and the 2 nice new dismounted cavalry stands). 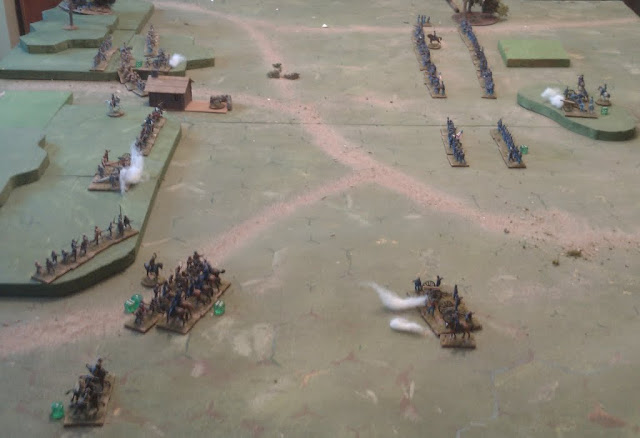 The real action begins.
The infantry, obviously a bit rattled, fired high and if the Brigadier hadn't been there, (he had had to drag them off the hill by the ear), and able to inspire them in melee, they would have broken and probably been ridden down. As it was, it was a tied melee. 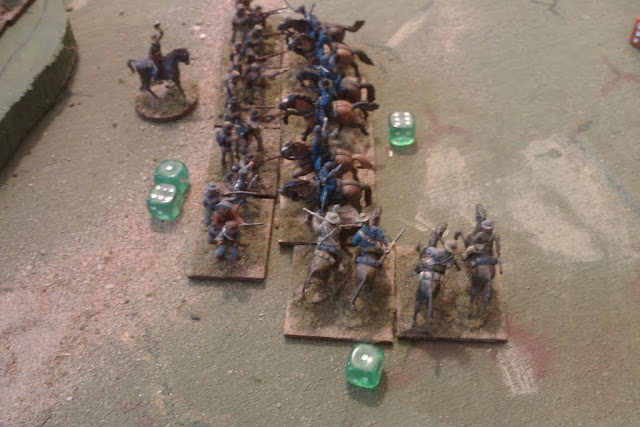 OOPS! Rebs, Rebs on Horses! (where the heck did they come from?)

Once they had mopped up the Yankee cavalry, the Reb horsemen started eyeing the now unsupported battery. Good timing for box cars from the artillery!

It was about this time that the Rebs realized that they had made a BIG mistake. During the artillery duel, they had ample warning that their battery was losing the fight but instead of pulling back to dead ground and slowly rallying the battery to get it ready to hold off the inevitable infantry attack, they stuck it out until they reached their break point. Then they figured what the hell, nothing to lose now, except there was, they soon went from 1 army morale point lost, to 2 points lost for a destroyed battery and no canister to stop  a break through. Well, not like the Yanks will break through with a mere 6 regiments vs 3 on that side of the hill. (Why were there still 3 Reb regiments fending off a 1/2 hearted attack by 2 Yankee regiments on the other side? Well, there was a lot of smoke and I was busy and well it was Hoods fault! He should have been here.) 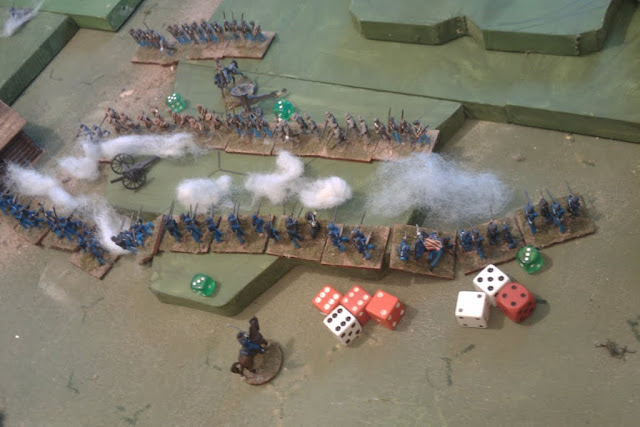 Where did the Yanks find all those 6's?? 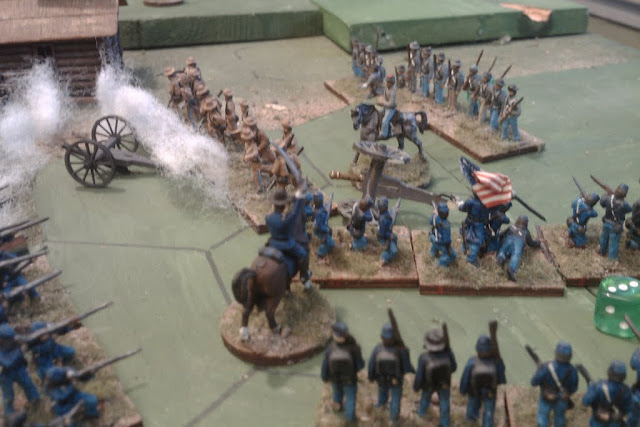 At this point, the flank charge actually stalled in a tied melee. The Rebs had 3 units at their Break Point and 2 units destroyed. Their morale was down to 3 from 10. But the Yanks were already down to...hmm 8 from 11.   OK, not good but the day is not lost yet! Counter attack on the right, then if the reserve wheels about and fires a load of ....OK failed order check. Oh crap the Butternuts just broke, General Ryder has been captured and the Yanks have just plowed into the  flank of the reserve. There goes the Army Morale. Skidaddle boys! Every man for himself!

What can I say? This is just the sort of game that I've been wanting to play for 2 well, 12 well, many years!

Hard to say how long it took as I was stealing away from other things to play a turn here and a turn there, not to mention updating the draft as I found things. About 10- 12 turns I think, and somewhere between 1 and 2 hours.

The slightly longer but much freer moves coupled with the reaction system and the cards worked like a charm as did interplay from the improved combat system with the double hits on a 6 (Thank you WRG 1685-1845 rules!), the increased number of hits per stand and the way the accumulating hits works.  I did have a couple of units that were on the verge of reaching their Break Point but were able to pull back and rally to the point where they could rejoin the action but most were too busy or the hits came too fast.

One thing has given me some concern. Once again I really enjoyed the 1/72nd armies on my 5x6 table. Not crowded at all. in fact I could have doubled the number of stands easily and possibly tripled though that might have made the game a long one. That means Divisional or even small Corps battles. If I compress the ground scale to 1mm = 2 yds, and use brigades as units, I'm into fighting original F&F scenario territory. And these guys will stand on my rolling cloth over hills terrain. If I do some spray painting of drop cloths and ... 1/72 nd Sikhs did you say? or 1/72nd Franco-Prussian? That was NOT the plan!

I'd better get working on getting my 40mm Toy Soldiers onto their bases so they can work their glossy magic on me..


I'm looking forward to trying the rules out vs a live opponent. 10mm Tricornes anyone?
Posted by Ross Mac rmacfa@gmail.com